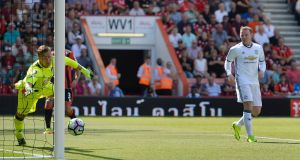 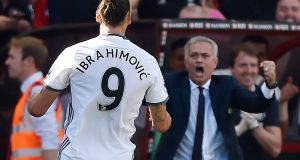 It took a little over an hour, and the rasping contribution from the ego leading his team‘s line, before Jose Mourinho gave up the snarling facade and allowed his true emotions to show.

The Manchester United manager had watched his new side establish a lead which already seemed insurmountable when Zlatan Ibrahimovic collected possession around 25 yards out and, with Bournemouth‘s players dizzied by Anthony Martial‘s presence, skimmed a shot gloriously across Artur Boruc and into the far corner of the net.

The attempt seemed audacious, invited by the lack of a challenge but executed with pinpoint accuracy and, while Ibrahimovic was mobbed by his delighted team-mates out on the turf, the manager sprinted out of his technical area screaming his own celebration with his coaches close behind.

Maybe Mourinho had been eager for a dash of real class to adorn his first Premier League game in charge of this team. Regardless, it was a goal to confirm United‘s dominance and eclipse the rather drab memory of an occasion that had meandered aimlessly until the visitors‘ lead was established.

Mourinho tends to win his first Premier League games of term, with this a seventh success in eight opening weekend outings with Chelsea and United. Ibrahimovic, too, has a liking for league debuts having netted on his bows in Serie A, La Liga, Ligue 1 and even the Champions League.

But, given the management had warned this team may not be able to start “like a train“ this year as they integrate new faces - the suspended Paul Pogba was not even here - securing a success in an arena where they had succumbed under Louis van Gaal last term seemed satisfying.

A new era has begun in encouraging fashion.

This team will become slicker than this in time. The perfectionist in the Portuguese manager will ensure that much. Mourinho had rather grumbled his way through most of his side‘s spluttering opening period until the hosts gifted the visitors a lead just before the interval.

If there was admirable patience to United‘s build-up play, their approach had been undermined too often by a slack final pass or a scuffed attempt which made the whole process appear rather ponderous. Ibrahimovic, for all his imposing strut at the tip of this side, had not mustered a single touch in the opposition penalty area through the first half, even if he would eventually prove his quality from further out. This was a plod for long passages, with the manager regularly spinning on his heels to berate the bouts of carelessness with his coaching staff in the dug-out.

Wayne Rooney had missed their best opening, his first-time shot from Juan Mata‘s square pass mistimed and easily claimed by a diving Artur Boruc. It said much that the chance had been eked out by Antonio Valencia‘s rapid burst to the by-line, the full-back‘s injection of pace serving to drag Bournemouth‘s back-line out of position.

This was a display in need of some zest though, in the end, the hosts‘ carelessness served just as well. Simon Francis‘ back-pass five minutes from the break was ill-judged and under-hit, and duly collected by a galloping Mata. His clipped shot was blocked by an on-rushing Boruc, only for the ball to rebound off the stumbling Francis‘ shins and back into the Spaniard‘s path. He thumped the ball gleefully into the empty net.

Mata had never previously scored a Premier League goal for Mourinho having featured 13 times for him at Chelsea in 2013/14. After last week‘s humiliation at Wembley, when the substitute was substituted in stoppage time apparently due to a lack of height in the side, this was a more satisfying intervention even if he still did not see out the afternoon.

In truth, the goal did also perhaps illustrate why Eddie Howe is still seeking defensive recruits. The Stoke utility player, Marc Wilson, is expected to return to the south coast - where he had previously played for Portsmouth - from Stoke in a deal worth an initial £2m this week.

There are frailties there and Steve Cook was almost exposed early in the second half as Ibrahimovic‘s flick sent Rooney bustling through beyond the centre-half, though Boruc reacted smartly to block. It proved a brief respite, Valencia soon barging beyond Charlie Daniels to clip over a cross which was met by a wild attempt from Martial.

True to the home side‘s ill fortune, the mishit bounced kindly for Rooney, alone on the edge of the six-yard box, who simply guided his header down and back across the Pole to double the lead. Ibrahimovic‘s own reward moments later confirmed clear dominance.

Bournemouth‘s own threat had been fitful and largely carried from the flank when Joshua King, the debutant Jordon Ibe or Callum Wilson drifted into space and at pace. Lewis Cook, a summer recruit from Leeds, delivered an assured display in central midfield on his first outing at this level but Howe‘s side, for all their energy, lacked the bite for too long to wound the visitors.

Howe threw on Lewis Grabban and Benik Afobe with the game effectively gone, and the former‘s pass was walloped in emphatically by Adam Smith, up from right-back, almost immediately. But, while David de Gea did well to deny Andrew Surman in stoppage time at the end, the hosts never seemed likely to bridge the chasm in class on show. Guardian Service