They are 30 points behind the leaders, Liverpool, who have two games in hand 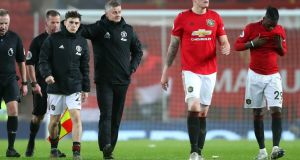 Manchester United have given Ole Gunnar Solskjær their unequivocal backing in the wake of the dismal home defeat by Burnley that prompted calls for change at the club.

Solskjær’s team have lost eight times in the Premier League this season and are 30 points behind the leaders, Liverpool, who have two games in hand.

But United have no intention of sacking Solskjær as manager and want to allow him more time to improve and potentially rebuild the team, who are six points behind fourth-placed Chelsea.

Most of the fans’ anger at Old Trafford during the game against Burnley, who won there for the first time since 1962, was aimed at the the club’s owners, the Glazers, and the executive vice-chairman, Ed Woodward.

Solskjær admitted he felt “disillusioned” afterwards and he must prepare his team to play at Tranmere or Watford in the FA Cup on Sunday. They then go to Manchester City in the Carabao Cup semi-final, trailing 3-1 from the first leg.

The former United defender Rio Ferdinand described himself as “embarrassed” by the performance against Burnley. “It’s embarrassing to be here seeing this,” he said on BT Sport.

“You can’t defend this. Fans were walking out after 85 minutes. People at the top need to see this and make changes and put a plan in place. Young kids in schools around the country won’t be wearing Man United shirts, they won’t be wanting to come here and see this.”