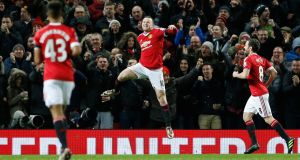 Wouldn’t you just know it? You wait 11 games for a first-half goal at Old Trafford and then two come along at once. Either Stoke have hit an unusually pallid run of form – they have gone out of two cups in the past week and here was a third league game without a win – or Manchester United might be back in business.

This was United’s first home game since the boo-fest 10 days ago that was defeat against Southampton, and Louis van Gaal’s arse, to use one of his own expressions, must have been twitching.

The suspicion all day had been that United had been put firmly in their place and thoroughly in the shade by His Pepness booking in across town, though there seems to be life in Van Gaal and his players yet.

Not only were Stoke put to the sword, no mean feat after the Boxing Day humiliation at the Britannia Stadium that had Van Gaal hinting darkly about resignation, but United have now put two results and two impressive three-goal performances together after recovering some of their composure in the FA Cup win at Derby last weekend. While a greater test of whether a corner has actually been turned will come this Sunday at Chelsea, at least United have confounded the cynics who suggested they only looked so comfortable against Derby because the Championship is their true level.

These have been dark days for United fans, who are hardly used to jeering their own team or sitting through interminably dull games, yet right from the start against Stoke the atmosphere was positive.

The outstanding Anthony Martial received a ripple of applause after just a couple of minutes for a piece of skill on the left, and that seemed to set the tone for what followed. Wayne Rooney saw a shot saved shortly afterwards, nothing remarkable in itself until you remember Old Trafford has recently witnessed games where you could count the attempts on target on the fingers of a mitten.

Breaking forward at will, moving the ball around and finding spaces behind the Stoke defence, United looked much more like their old selves and deservedly went ahead after 14 minutes. Jesse Lingard had to stoop at the far post to power Cameron Borthwick-Jackson’s cross over the line, though the ball into the area was so good and the six-yard line so packed that Stoke could hardly have complained had anyone else managed to score.

A supercharged Martial then took on and beat the Stoke defence, only to shoot into the side-netting, before confirming United’s resurgence was real with a stunning finish to find Jack Butland’s top corner.

Stoke were not performing at their highest level, it must be admitted. As at Liverpool last week they deployed Peter Crouch up front but did not adapt their game sufficiently to bring the best out of him. Marko Arnautovic appears to alternate scintillating displays with humdrum ones, and this was one of the latter. And though Ibrahim Afellay was lively and inventive, his passing was not always incisive.

An injury to Phillip Wollscheid led to Glen Johnson moving across to play centre-half too, which in turn led to the game’s moment of comedy when Rooney barged him off the ball with an old-school shoulder charge and coolly beat Butland at his near post. The goal might have been allowed to stand in 1956, and perhaps ought to have done in 2016 for its cheek alone, though after checking with his assistants via his radio link Roger East thought not.

The incident was a useful barometer of Rooney’s mood. A couple of months ago he would have done something like that only through frustration or petulance. Here, the brash, almost bullying Rooney of old was back, trying it on because he was cocky enough to do so and rightly confident he could execute the goal-scoring part expertly.

Anyone watching this game would conclude reports of Rooney’s demise as a competitor and a goalscorer were mad, miles off the mark. As he nears the all-time Manchester United scoring record he seems to have found fresh legs and all his old enthusiasm.

This is a visibly different Rooney from the player who toiled in vain at the start of the season and had everyone wondering why Van Gaal was keeping faith. His part in the second goal was impressive enough, completing a prolonged passing move by finding Martial in space, but the real evidence was his side’s third.

With United breaking from halfway in the cluster-bomb formation last seen under vintage-era Fergie, Juan Mata had Martial haring ahead to his left and Rooney doing the same thing on his right, both calling for the ball. Mata picked out Martial, so Rooney continued his run to turn up at the far post so as to be able to tap over the line when the cross arrived on cue.

Simple, effective, unstoppable. How long United can keep it up is anyone’s guess, but at least two of their three goals were of the highest quality.

This time there were no boos at the final whistle and Van Gaal escaped unmolested, even signing a few autographs on his way along the touchline at the end. The Southampton fiasco is already a fading memory, and if United can emerge this jaunty from Stamford Bridge at the weekend then truly anything is still possible.

1 Keeping Donegal on the road to success a costly business
2 England v Ireland preview: Ireland’s revival to face its sternest test
3 Six Nations: Ireland v England all you need to know guide
4 Matt Williams: Ireland will need to step up on Wales display to prevail at Twickers
5 Ireland Slam England at the Gardens to open up Grand ambitions
Real news has value SUBSCRIBE