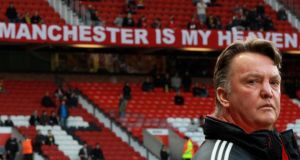 Manchester United expect Louis van Gaal to win the Premier League title next season and have given their new manager a €184 million transfer fund to rebuild the squad this summer.

The Netherlands’ current manager is to be unveiled at Old Trafford in July after he has taken his country to the World Cup and before United’s summer tour of the US.

On a dramatic day for the 20-times champions it also emerged that:

Ryan Giggs (40) is to be Van Gaal’s number two, and has retired from playing after a glittering career spanning 23 seasons;

Paul Scholes, Phil Neville and Nicky Butt have been left in the dark about their futures on the backroom staff;

Van Gaal has been challenged to win United a 21st title in his first season, with the vice-chairman Ed Woodward sanctioning a sizeable kitty to pursue targets that include Southampton’s Luke Shaw, Bayern Munich’s Arjen Robben and Toni Kroos, and Borussia Dortmund’s Mats Hummels.

Dismal defence
Following the dismal championship defence under Moyes that ended with United in seventh place, Van Gaal is confident he can again make the club serious title challengers, with a Champions League berth the very least required.

He said: “It was always a wish for me to work in the Premier League. To work as a manager for Manchester United, the biggest club in the world, makes me very proud. I have managed in games at Old Trafford before and know what an incredible arena Old Trafford is and how passionate and knowledgeable the fans are. This club has big ambitions; I too have big ambitions. Together I’m sure we will make history.”

Woodward said: “Van Gaal’s track record of success in winning leagues and cups across Europe throughout his career makes him the perfect choice for us. People know him as a larger-than-life character, but I have also been extremely impressed by his intelligence, thoughtful approach to the role and his diligence.”

‘A great guy’
There was a welcome from Jose Mourinho, who Van Gaal appointed as his assistant at Barcelona. “He is a great football manager, and I am happy he joins me in the same country and the Premier League,” the Chelsea manager said. “But more important than that, he’s a great guy, a great man, and I wish him well.”

As Moyes was sacked on April 22nd it took United four weeks to land Van Gaal yet the 62-year-old was always the number one choice, having been first sounded out as the prospective new manager two days after the Scot’s sacking. The delay is understood to have been due to United wishing to respect his current employer, the Dutch Football Association.

There was also the future of Giggs to consider, but once it became clear Van Gaal would offer the Welshman the role as his number two, the Dutchman accepted after a meeting in Noordwijk last week. That is thought to have been the third face-to-face encounter between Woodward and Van Gaal, with Woodward “delighted” that the Giggs will remain on the coaching staff.

Key role
Giggs said: “I am thrilled to have the chance to serve as assistant manager. Louis van Gaal is a world-class coach, and I know I will learn a lot about coaching from being able to observe and contribute at such close quarters. Manchester United has been a huge part of my life, and I’m delighted to be able to continue that relationship in such a key role.”

Although Marcel Bout and Frans Hoek are also joining Van Gaal’s coaching team – the latter appointment as goalkeeping coach, so Chris Woods departs – the futures of Scholes, Butt and Neville are still to be decided. United consider the three members of the Class of ’92 to be of great value to the club, though none of them have as yet been offered a role.

In an open letter published on the club’s website, Giggs said of his retirement: “For me today is a new chapter filled with many emotions – immense pride, sadness, but most of all, excitement towards the future.”
Guardian Service

All in the Game: Nigeria bite back in war of words with Redknapp 09:00
Colin Kaepernick’s exile is too fresh for NFL to speak out on US protests 07:00
1913: The year the GAA really started to get its house in order 06:00
Ken Early: Ken Early: Why international football is fading into obscurity 06:00
‘A radical departure’: Who are CVC and what are their aims with rugby? 06:00

1 ‘A radical departure’: Who are CVC and what are their aims with rugby?
2 Ken Early: Ken Early: Why international football is fading into obscurity
3 All in the Game: Nigeria bite back in war of words with Redknapp
4 Colin Kaepernick’s exile is too fresh for NFL to speak out on US protests
5 Connell losing touch with club championship is real tragedy of Normal People
Real news has value SUBSCRIBE