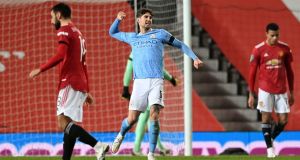 Manchester City will take on Tottenham in April’s Wembley showpiece aiming to claim the competition for a remarkable fourth consecutive year, which only Liverpool have achieved.

For Ole Gunnar Solskjær and Manchester United this was a fourth successive semi-final reverse: losing at the stage is becoming a habit they have to break. What killed them were the two latest episodes of slack defending from set-pieces.

Each presaged John Stones and Fernandinho’s strikes. Here, too, is another bad practice that has to be eradicated. City, though, were jubilant and rightly so. When it mattered they landed the knockout punches. And, now, a fascinating tactical showdown between Pep Guardiola and José Mourinho beckons.

Each manager made two changes. Solskjær selected Dean Henderson to continue in goal in the competition, meaning David De Gea was on the bench, and Victor Lindelöf replaced Eric Bailly in central defence. Guardiola stood Rodri down to the bench and with Bernardo Silva suspended, Fernandinho and Riyad Mahrez came into a City XI with no recognised No 9, Sergio Agüero and Gabriel Jesus both among the substitutes.

City began how they like: stroking the ball as Phil Foden, Oleksandr Zinchenko, Fernandinho and Stones all took turns. They had the ball in the net when Ilkay Gündogan turned home Foden’s cross from the left but it was ruled correctly offside. The contest already had a far higher tempo than last month’s cagey 0-0 draw here. Then Guardiola oversaw an approach that was muted for him and his team.

What did still remain, though, was City’s penchant for sloppiness from the back as Stones’ errant pass caused Sterling to lose the ball, Scott McTominay reversed-passed to Bruno Fernandes and the City goalkeeper, Zack Steffen, flung himself high and left to tip the Portuguese’s goal-bound shot out for a corner.

An invigorating spectacle was next decorated by Kevin De Bruyne who, when the ball was rolled to him in a central area, paused, then let fly: the effort left Henderson a spectator and only his right post prevented the opener, the ball smacking it.

Guardiola had João Cancelo roving in from right-back to make an extra man in midfield – a ploy he uses occasionally – yet it did not seem to confuse United: Paul Pogba often following him from his wide left berth and pickpocketing him when he could. United were functioning on around 30 per cent possession.

After Foden had a second City strike chalked off for offside – the third in the half with Rashford’s effort being disallowed early in the game – the home side showed the menace they possessed: Rúben Dias’s block from Rashford was desperate and effective. Rashford’s next contribution was a touch that disappointed when Fred’s chip had the forward bearing down on Steffen’s goal: the ball slipped from his boot and the keeper collected.

What had developed was a contest akin to a boxing match in which each pugilist took turns to aim at the other. Nothing was quite connecting but the sense was at any moment it might. By the interval the sides had become a touch becalmed, much of the action occurring in the middle third, each feinting and hoping for an opening that would prove decisive.

United’s start to the second half consisted of a Luke Shaw free-kick that was scrambled clear. City’s opening offensive act was Fernandinho’s foul on Pogba that brought a trademark yellow card for the captain. Brighter from the visitors was how Raheem Sterling’s wriggle drew McTominay into conceding a free-kick from which they struck. Foden curled a sweet delivery into a crowd of players, a hapless Maguire watched the ball pass, and the delighted Stones bundled in.

How might United respond to the threat of a fourth consecutive semi-final defeat under Solskjær? A balance had to be found between pressing for an equaliser and not allowing City in to score a second that might be fatal.

A warning came when the sky-blue shirts broke and Sterling forced Henderson to concede a corner. Another had Sterling this time being stymied by Henderson low down. Henderson’s third vital intervention was to palm Mahrez’s 20-yard shot over. United emerged to claim a corner and Maguire – not having a great period in the game – headed over. A further flicker of hope came from a Fernandes attempt that went straight at Steffen.

Fernandinho’s second came when a weak Aaron Wan-Bissaka header from a City corner reached him and he beat Henderson from outside the area. Guardiola’s side deserved victory. For Solskjær’s team it is that sinking feeling again. - Guardian