Had Sterling been a little more clinical, the scoreline might have been embarrassing 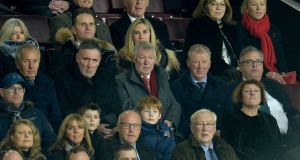 You can’t hit what you can’t see. On a mild but riotous night at Old Trafford Manchester City served up a beating as swaggering and dominant as any they have managed at this ground. In front of the grandees of Red Manchester – Wayne Rooney, Alex Ferguson, Ryan Giggs – City executed a coup de grâce born of pure disrespect, United taking the best part of an hour to work out just what, exactly, was going on out there.

What had happened was that City had simply disappeared from view, slipped into the cracks, eluded detection. Had Raheem Sterling been a little more clinical in front of goal, the scoreline might even have been embarrassing. United’s Plan A, meanwhile, foundered against a fluid, kaleidoscopic City side who moved the ball forwards with seamless, almost ghostly speed. It’s hard to play on the counter-attack, after all, if there’s nothing to counter.

This was, in many ways, a derby played in the shadow of its predecessor, a month ago, when United conjured a stunning win at the Etihad Stadium by tearing City apart again and again on the counterattack. You could be sure that Pep Guardiola had spent plenty of time in the interim plotting a fix. Partly it’s the problem-solving obsessive in him, but partly too it’s the sense that Guardiola seems to detest getting countered more than most: he sees it not just as a tactical flaw but some deeper failing of imagination and ingenuity and basic manliness.

And so as the teams were revealed an hour before the game, a certain intrigue swirled around Old Trafford. No Sergio Agüero. No Gabriel Jesus. Six midfielders, or seven if you included Fernandinho in central defence. There has always been a part of Guardiola that adores midfielders above all others, that longs one day to put 11 of them out on the pitch, merrily rondo-ing the ball into the net like some whirling, reeling ceilidh routine. So what was he up to here?

We didn’t have to wait long to find out. It was, in effect, a 4-4-2 without either of City’s two main strikers. Or, if you preferred, a 4-2-4 with Sterling and Riyad Mahrez as the advanced wingers, or perhaps a Spanish-style 4-6-0, or even – if you squinted quite hard – a 4-3-3 with Kevin De Bruyne as the false nine. The point was that there was no point, no focus, no recognised axis of attack: just a series of multiple pivots all buffeting gently and randomly against each other like windchimes.

This was wilful shape-shifting, shadows of shadows, a trick of the light, smoke and Mahrez. Occasionally Ilkay Gündogan would be the farthest man forward. Occasionally it would be Kyle Walker, as with City’s first goal, when he surged deep into United territory before laying the ball off for Bernardo Silva’s unstoppable finish. Occasionally he would be the deepest midfielder, picking the ball up from in between the centre-backs. Occasionally it would be Mahrez, whose role appeared to be as much precautionary as predatory: hanging back on the right wing (on Guardiola’s frequent screamed instruction) to deter the quick out-ball to Brandon Williams.

The result was a first half of the most lawless abandon, as United grasped with empty fists at a City side who may as well have been playing with a two-second head start. On the half-hour Mahrez broke United’s lamentable attempt at an offside trap and doubled City’s lead with Guardiola’s favourite finish: the pass into an unguarded net. Six minutes later the match, if not the tie, was over, Andreas Pereira walking the ball into his own net after De Bruyne had not only turned the desperate Phil Jones but rifled through his pockets, deleted his Netflix watchlist and changed the default language on his phone to Mandarin.

United were far from blameless, of course. Their retention of the ball was abysmal and their tactics, too, felt hopelessly naive: attempting to play an aggressive high line with Jones, Victor Lindelöf and David de Gea would have been ambitious enough against a regular-strength opposition, let alone City. And not until the introduction of Nemanja Matic and Angel Gomes in the second half did United manage to wrest back any sort of control of the game, pulling a goal back and looking briefly vertebrate.

Ahead of this fixture Guardiola urged United to keep faith in Ole Gunnar Solskjær. You can probably insert your own joke there. But he had a point: this game was a snapshot of two teams at very different stages in their cycles. It helps, of course, when you have a squad of City’s quality and versatility to call on, drilled and grooved in the nuances of Pep-ball, able to change shape at a moment’s notice.

This, ultimately, was the difference between them: a coach searching for fixes and a coach still striving to build something worthy of fixing.