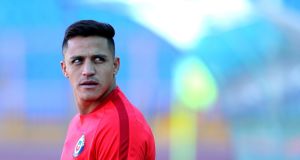 Manchester City are increasingly confident of signing Alexis Sánchez, despite Arsenal’s reluctance to sell, because of the forward’s desire to play under Pep Guardiola, with the potential fee in the region of £50 million (€56.8m).

Although Arsene Wenger is minded against allowing his finest player to leave, he is aware of Sánchez’s desire to join City. If the Arsenal manager does not sanction a sale this summer he faces losing Sánchez in 12 months on a free.

Sánchez is out of contract then and has refused to sign a new deal. The 28-year-old has been offered around £250,000 a week by the north London club but could earn closer to £300,000 at City.

Sánchez was signed by Guardiola for Barcelona in summer 2011 from Udinese and was managed by him until the Catalan left at the close of the following season.

If Sánchez does force a way out Arsenal’s preference is not to sell him to a domestic rival. The club would rather he move to Paris Saint-Germain or Bayern Munich, with each also wishing to buy him. Arsenal are trying to strengthen their forward line regardless and have had a £31m offer for Monaco’s Thomas Lemar turned down.

It is understood Sánchez’s wife enjoys living in London and may need some persuading to move to the Manchester area but this is not a potential deal-breaker.

With Chile in the Confederations Cup until Sunday and Arsenal determined to hold on to Sánchez, City are prepared to play the long game. Their pursuit of Dani Alves should be concluded much more swiftly, possibly within 48 hours.

The Brazilian right-back has been released by Juventus and there is an expectation at the Etihad Stadium the 34-year-old will be a City player before the end of the week.

Gabriel Jesus, a compatriot of Alves’s, would welcome his arrival. “It has not yet materialised, but when it does, I’ll be quite happy,” he told the Brazilian TV show Noite dos Craques. “I will be happy not just because of his quality but for the energy he has. I really like the energy he has, it motivates the group, motivates people to always want to win in life and in the game.”

Guardiola has allowed Bacary Sagna and Pablo Zabaleta to leave and so wants to sign two right-backs. Tottenham Hotspur’s Kyle Walker is another target and Monaco’s Benjamin Mendy is the preferred option as the first-choice left-back following Gaël Clichy’s departure.

City retain an interest in Monaco’s Kylian Mbappé, though if Sánchez does sign it makes the purchase of the 18-year-old, who could cost from £100m upwards, a remote proposition.