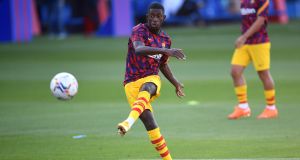 Manchester United have made contact with Barcelona to see if they can sign Ousmane Dembélé on loan for the 2020-21 season.

United are not entertaining the idea of signing the France international, who has only made 52 league starts for Barcelona since signing from Borussia Dortmund in 2017, on a permanent deal. Barcelona would prefer to sell Dembélé to free up funds for the manager Ronald Koeman to initiate a squad rebuild but realise this may be difficult to achieve.

Koeman said on Wednesday when asked about the Dembélé situation: “ I’m counting on him. ‘He was very good in the first weeks [OF PRE-SEASON]but he had a downturn last week. He trained well today and I’m counting on him. But these are decisions for the club and the player.”

The Old Trafford hierarchy turned their attentions to Dembélé after Dortmund reiterated that they would not listen to any bid lower than €120m for United’s No1 target, Jadon Sancho.

United would have to pay Dembélé’s salary in full should they be able to sign him on loan and they are open to either a straight loan or a loan with an option to buy.

United, however, would face an uphill battle to convince the player to move to England. He is determined to stay at Barcelona despite the fact that he has not been able to become a regular starter in the three years he has been at Camp Nou.

The 23-year-old was not interested earlier this summer when Liverpool inquired about a loan deal and said again that he would prefer to stay at Barça when Juventus wanted to make him part of a swap deal that in the end saw Arthur leave the Catalan club with Miralem Pjanic going in the other direction. - Guardian