Lukaku and Baines on target as Everton remain unbeaten 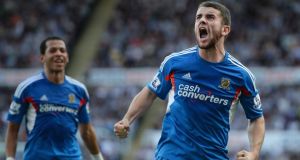 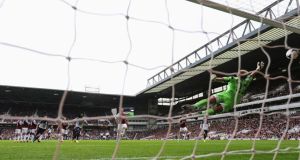 Leighton Baines of Everton scores from a freekick past Jussi Jaaskelainen at the Boleyn Ground. Photograph: Ian Walton/Getty Images

Liverpool’s defeat to Southampton left neighbours Everton as the only unbeaten team in the top-flight this season after Leighton Baines inspired a dramatic 3-2 win over 10-man West Ham at Upton Park.

Ravel Morrison put the Hammers ahead at the break from a heavily deflected drive, but Baines equalised just past the hour mark when he smashed an unstoppable free-kick past Jussi Jaaskelainen.

Mark Noble restored the Hammers’ advantage from the penalty spot in the 76th minute after Kevin Nolan was up-ended in the box — but turned from hero to villain seven minutes later when he was sent off for a foul on Ross Barkley just outside the box.

Stephane Sessegnon needed just 20 minutes to heap more misery on his former club as West Bromwich Albion eased to a 3-0 win over Paolo Di Canio’s ailing Sunderland at The Hawthorns.

Having left the Black Cats on transfer deadline day, Sessegnon refused to celebrate after bundling home a scrappy opener midway through the first period.

Liam Ridgewell fired home the Baggies’ second on 76 minutes and the impressive Morgan Amalfitano completed the scoring with a strong drive in injury time.

Sone Aluko fired a stunning late winner for Hull as the Tigers twice hit back from behind to beat Newcastle 3-2 in a thriller at St James’s Park.

Loic Remy’s brace proved in vain for the Magpies and the Frenchman was left disappointed after missing a glorious chance to grab an equaliser in injury time. Remy opened the scoring from close-range in the 10th minute before Robbie Brady drove the equaliser under Tim Krul just before the half-hour.

Remy put the Magpies back in front just before the break but Ahmed Elmohamady headed an equaliser three minutes into the second half, and Aluko won it for the visitors with a superb side-footed volley from the edge of the box in the 76th minute.

Libor Kozak came off the bench to earn the three points for Aston Villa in a 1-0 win over Norwich at Carrow Road. Villa’s hopes were hit by the withdrawal of Christian Benteke in the 27th minute with a hip injury — but his replacement Kozak took just three minutes to make his mark as he swept home a lay-off from Gabriel Agbonlahor.

Villa goalkeeper Brad Guzan had saved a seventh minute penalty from Robert Snodgrass after Ciaran Clark was penalised for a handball, and also denied Canaries debutant Gary Hooper by tipping his late header over the bar.