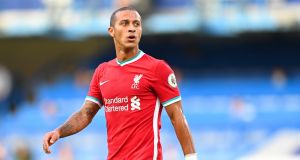 The Liverpool midfielder Thiago Alcântara has tested positive for Covid-19. The 29-year-old, who missed Monday’s 3-1 victory over Arsenal, has exhibited minor symptoms of the virus but is in good health and is getting better, the club has said.

“The club has [followed] and will continue to follow all protocols relating to Covid-19, and Thiago will remain in self-isolation for the required period of time,” Liverpool added.

The club’s first-team doctor, Jim Moxon, said: “It is the choice of each individual whether they reveal publicly the outcome of a Covid-19 test. We have followed all the protocols to the letter and Thiago is okay. He will be self-isolating now as per the guidelines and hopefully he’ll be back with us soon.”

Thiago joined Liverpool from Bayern Munich for an initial fee of £20 million on September 18th and made his debut in the 2-0 victory over Chelsea two days later. He shone as a second-half substitute and there was much excitement among Liverpool fans over the prospect of seeing him make his full debut against Arsenal. That did not occur, and self-isolation means the Spaniard will also miss Thursday’s game against the same opponents in the English League Cup as well as Sunday’s league visit to Aston Villa. He should, however, be available for the trip to Everton on October 17th.

“After the international break, he will be fine,” said Jürgen Klopp after the win against Arsenal. “For sure, and that’s the situation at the moment.”

Liverpool’s other signing during the current transfer window, Diogo Jota, not only featured against Arsenal but also scored, having come on as a second-half substitute. Speaking afterwards, the Portuguese said: “When you arrive at a team that are world champions, you always try to adapt as quickly as possible. The way they received me is exceptional.” – Guardian