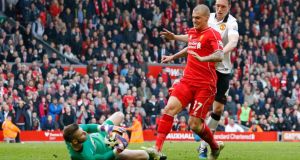 Skrtel appeared to step on the Spaniard in the 95th minute of the match at Anfield, which Liverpool lost 2-1. Although it remains unclear whether this was intentional or not.

The FA said in a statement the incident was not seen by the officials, but was caught on video.

The Slovakian has until 6pm on Tuesday to respond to the charge.

If he were found guilty Skrtel would face a three-match ban, ruling him out of the Premier League matches against Arsenal and Newcastle and the FA Cup quarter-final replay at Blackburn.

The Reds will already have to cope without Steven Gerrard, who was sent off less than a minute after coming on as a half-time substitute for a stamp on Ander Herrera.

The defeat left Liverpool five points behind their opponents in the race for a top-four finish, although they have a more favourable fixture run-in.

Talking post match Liverpool manager Brendan Rodgers insisted that the player was trying to get the ball.

Meanwhile the club’s midfielder Adam Lallana has been ruled out of the England squad for the games against Lithuania and Italy with Tottenham’s Ryan Mason coming in for his first call up.