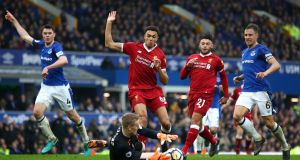 The Merseyside derby at Goodison Park is one of six games that police want played at a neutral venue. Photograph: Julian Finney/Getty Images

Liverpool and Everton will next week oppose plans to make them play at neutral venues when the Premier League restarts amid concern that football supporters in general are being portrayed as lockdown breakers.

Jürgen Klopp’s runaway leaders will be denied any opportunity to win the club’s first league title in 30 years at Anfield under plans outlined by Mark Roberts, the national lead for football policing and deputy chief constable of South Yorkshire Police.

Other games, including several London derbies, are also being considered for neutral venues. Police want the matches moved to reduce demands on officers during the public health crisis and to discourage fans from gathering outside stadiums.

The latter argument was used by Liverpool’s city mayor, Joe Anderson, as reason to cancel the season and award Klopp’s team the title in April. Anderson’s comments were met with dismay by Liverpool, who said there was “a lack of evidence to support such claims”. Their position has not changed during discussions over Project Restart and the club rejects the suggestion that Liverpool fans, and football supporters in general, can not be trusted to observe lockdown rules.

There was further unease at Anfield when it emerged several of their games were being considered for neutral venues. The games identified were not proposed or discussed at Thursday’s Premier League meeting.

Both Merseyside clubs will argue their case for playing at home – only the rearranged derby affects Everton – at a safety advisory group (SAG) meeting expected next week. SAG meetings involve the clubs, supporters groups such as the Everton Fans Forum and Spirit of Shankly, Liverpool council, police and other emergency services plus the Sports Ground Safety Authority.

Liverpool have been working on detailed plans to play without fans inside or outside Anfield since football stopped in mid-March. The club accepts there are risks but believes they are manageable risks. For their part, Everton question the sporting integrity of playing the derby at Anfield in December but not the return fixture at Goodison. The clubs will be prevented from hosting matches at Anfield or Goodison, however, should SAG refuse to issue a licence. Given the unprecedented situation it is possible SAG could refuse on government advice.

Also on Friday, the Premier League chief executive, Richard Masters, said he expected a decision on neutral venues in the next seven to 10 days and that he wanted the season “to be played out on the pitch, and try and keep it as fair as it possibly can be”. Masters also said there was optimism surrounding a phased return of fans to stadiums during the 2020-21 season.

In a statement, the Premier League said its ambition “is to complete all of our remaining fixtures this season home and away, where possible. We are working with our clubs to ensure risks are assessed and minimised, while co-operating with the police at a local and national level. Discussions with the National Police Chiefs’ Council and UK Football Policing Unit have been positive and are continuing. We are prepared for all outcomes and have a neutral-venue contingency.” – Guardian

Alex Hales remains out in the cold as England name squad to face Ireland 15:23
Former Waterford boss Alan Reynolds joins Ireland Under-21 set-up 13:09
Chris Froome to join Dan Martin at Israel Start-Up Nation 12:51
When Clare’s hurlers climbed Everest and won Munster in 1995 12:15
Rafael Nadal: A mental giant who plays every point as though it’s his last 10:59