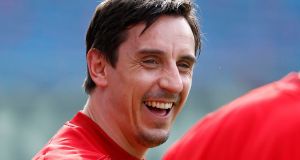 Gary Neville is admired in Spain where Manchester United made quite an impact. Photograph: EPA

Valencia’s players had thought for a few weeks now that Neville might one day become their coach. What they didn’t expect was for it to be Gary.

Phil Neville took charge of training this week after Nuno Espírito Santo announced his resignation on Sunday night and was sacked on Monday afternoon; his brother will take charge after Saturday’s league clash with Barcelona, having signed a contract until the end of the season. His first game is a huge one: the final Champions League group match at home to Lyon at Mestalla next Wednesday.

The players’ relationship with Nuno had long broken down, but it remained good with his assistant Phil Neville, who has impressed since arriving in the summer but does not yet have the coaching qualification necessary to take charge of a team in Spain.

There is a photo of Phil, Gary and the president, Layhoon Chan, strolling across the pitch at Paterna, the club’s training ground. It comes from back in the summer. Phil was already there, of course. He and Gary are business partners of Valencia’s owner, Peter Lim. The Singaporean is a half owner of Salford City and has invested in other projects undertaken by the Class of 92, of which Gary is the leader.

At Mestalla it is said that Lim is more convinced by Neville’s more British, Fergusonian view of how to run a football club than by the usual European approach. Now it can be put into practice. The sporting director was sacked in the summer and not replaced; Neville is likely to be manager, not just coach.

Neville does not come into this blind even if he does, for now, come into it partly mute and among the potential appointments will surely be a translator. His relationship with Lim and his brother means he arrives having a clear view of what awaits and probably having prepared for it. This is not a step into the unknown.

He has at his disposal a team that returned to the Champions League, after a three-season absence. It is a young squad that undoubtedly has talent but is ninth in La Liga. He has an assistant coach whom he can trust entirely, a guide and a useful bridge to the squad, someone who as made a notable effort to integrate and communicate and has been admired for it. He will have a handle on where Nuno went wrong and how he can be different; it was notable that Chan talked about his “leadership” qualities.

Gary Neville is admired in Spain. Manchester United made quite an impact and there is a kind of reverence towards a club that could keep a structure that strong for that long: one manager in a quarter of a century feels like an even more remarkable achievement here than it does in England.

A captain, Neville is seen as a symbol of that side and if his tactical analyses don’t reach Spanish TV, his role with the national team provides a sense that he is prepared, coaching material.

Naturally, though, there are doubts about a man without experience taking his first job, halfway through a season, in a foreign country. There are other, more profound doubts too – doubts that are not really about Neville but will affect him – and he will surely be aware of them, not least as some concern precisely that model, the very structure of the club. Here too, he is at least forewarned, better briefed than any other incoming coach could hope to be.

Phil has watched the stadium turn on its manager, chanting for Nuno to leave. He will have grasped that this is a different environment to those he knew in Manchester and on Merseyside, one with a particular swirl of pressure and politics.

On Monday, Nuno insisted that the problems at Valencia were “social, not sporting”. On one level, he was right. There have been on-field problems – Valencia have performed far more poorly than they should have – but not only sporting problems. Results palliate everything, but without them significant fault lines are exposed.

Neville becomes the 14th coach in a decade of institutional instability at Valencia. This is a club with two stadiums: one they could not sell and one that they could not afford to finish building, long gripped by economic crisis and internecine battles, where presidents too have come and gone, a club that came to be effectively owned by a bailed-out bank.

Lim’s arrival last year was their salvation, supposed to bring economic and social stability at last, and the return to the Champions League reinforced that idea.

But in the summer former president Amadeo Salvo, who had helped bring Lim to the club, and sporting director Rufete were forced out. Both were popular with supporters.

What, supporters want to know, is the plan? What are the real motives of Meriton, Lim’s company? And what is agent Jorge Mendes’s relationship with the club? “Nuno go now!” has been the soundtrack to this season. Supporters did not want Nuno to continue, but that was not only because his team was playing badly, but because of what he had come to represent.

Mendes, who is close to Lim, had brokered the takeover in 2014 and helped to stock up the squad since, with players of varying quality. Nuno was the first player he had ever represented; when Salvo and Rufete, theoretically Nuno’s bosses, were forced out Nuno appeared to accumulate power as Mendes’s man. “Fans didn’t always support the team,” Nuno said. He was right, and they are indeed demanding, but he did not often engage with the reasons why. In the absence of Lim and Mendes, rarely there on match days, he became a target for deeper misgivings than just those related to the way the team played, the visible head of Valencia.

Every decision, every move, came to be seen through the prism of Lim/Mendes, treated as suspicious by definition. That may not always have been justified, but some decisions were certainly questionable. The doubts started to overwhelm all else.

On Monday, Chan said that she was sick of hearing the name Mendes and that the new manager would not be represented by him. Here was an attempt to break out from that spiral, to restructure Valencia and reassure the fans. Nuno had gone, Neville had come. But while Neville is not Mendes’s client, he is Lim’s partner, and similar questions will be asked if results do not follow. Guardian Service