Leeds takeover in doubt after lawyer escorted from Elland Road 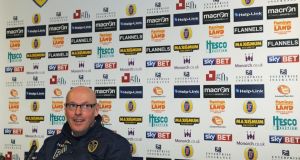 Massimo Cellino’s bid to take control of Leeds appears to be in danger after it emerged his legal representatives had been escorted from Elland Road.

The fast-moving soap opera that unfolded last week showed no sign of slowing down on the day manager Brian McDermott reported for duties as normal on Monday morning following Cellino’s failed attempts to sack him on Friday.

But following reports the same solicitor who told McDermott he was sacked via a telephone call on Friday night, had been led out of Elland Road by the club’s current managing director David Haigh, it seems a second takeover bid is heading for the rocks.

These latest events have led to mounting speculation that Sport Capital and another consortium, Together Leeds, are ready to join forces to mount a joint takeover bid for the Sky Bet Championship club.

Together Leeds, which includes former Manchester United director Mike Farnan and former Hull chairman Adam Pearson, who left his position as commercial director at Elland Road in 2001, had been hoping to enter into talks with GFH Capital.

It is now understood that representatives of Sport Capital, headed by Haigh and businessman Andrew Flowers, the owner of main club sponsors Enterprise Insurance, and Together Leeds will begin talks with GFH Capital on Tuesday.

This latest twist occurred soon after McDermott had appeared at a press conference to announce it was business as usual, on the training field at least.

The 52-year-old former Reading boss said he could not walk away from the club following the scenes of support shown by fans during Saturday’s 5-1 win over derby rivals Huddersfield despite receiving advice from “big people in the game” to do so.

He said he had been given written assurances by GFH Capital, but still had no idea who the club’s owners would be when his side face Yeovil in a league fixture on Saturday.

When asked if his position was more secure than it had been on Friday, McDermott said: “I’ve no idea. I can’t answer that question.”

Of his assurances, he added: “I’ve got them written down, so that’s the most important thing and I needed them. Basically I’m responsible for all football matters at the club.

“Nobody will be invited into the dugout or the dressing room, or speak with the players unless the manager okays it. I’ve been given assurances that I answer to GFH and GFH own the club and when or if the club does change hands I’m given assurances as to who that’s going to be.

McDermott refused to apportion any blame for the sequence of events which led to his absence on Saturday when assistant Nigel Gibbs took charge of the side.

“It would be easy for me to sit here and say that I’ve been let down and start blaming people,” he said. “I would suggest that this situation should never happen to a football manager or to staff and players. It’s not right and let’s hope it never happens again.”

McDermott saluted the League Managers’ Association, who he turned to on Friday night for advice, and said he was braced for a turbulent next few days.

“What comes in the future, I don’t know,” he added. “We’re still up in the air. There’s still obviously talks (going on), there’s rumours about rumours, there’s been a lot of speculation about all sorts of things.

“As far as the ownership is concerned, it’s still to be settled I would imagine. But until GFH tell me there’s a new owner I work for GFH.”