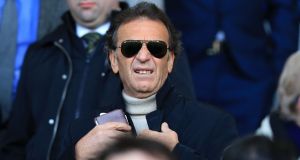 Leeds owner Massimo Cellino has been suspended for 18 months and fined £250,000 for breaking the Football Association’s agent regulations.

Cellino is also to attend and complete an education programme covering “the duties and responsibilities of an owner and director of an English football club”, while agent Derek Day has been hit with a suspension and fine as well.

Leeds, Cellino and Day were charged by the FA in May in relation to the July 2014 deal that saw Scotland striker Ross McCormack join Fulham from Leeds for around £11million.

Cellino and Leeds have already indicated their intention to appeal.

A statement from the FA on Thursday said: “Leeds United and the club’s owner Massimo Cellino have each been fined £250,000 for breaching the FA’s football agent regulations.

“The charges relate to the transaction involving the transfer of Ross McCormack from Leeds to Fulham on 8 July 2014.

“Furthermore, with effect from February 1, 2017, Mr Cellino has been suspended for 18 months from being a director or shadow director of Leeds United or any other football club or company whose activities include ownership of a football club.

“By April 30, 2017, he is to attend and complete an FA education programme covering the duties and responsibilities of an owner and director of an English football club.

“In relation to the same matter, authorised agent Derek Day has been fined £75,000 after admitting to breaches of the FA’s football agent regulations.

“Mr Day has also been suspended from all intermediary activity for 18 months, commencing immediately for a seven-month period with the remaining 11 months being suspended for two years and only to come into effect if before December 6, 2018, he commits a further breach of the FA’s rules and regulations.

“The club and Mr Cellino have indicated that they contest the sanctions imposed by the regulatory commission and intend to issue an appeal in accordance with FA rules and regulations.

“Written reasons regarding the decision will be held pending the outcome of any appeal.”

On Wednesday Leeds released a statement from Cellino in which he expressed surprise at reports he and the club were set to be hit with the suspension and fines, adding: “I am not guilty and I will take the right steps to defend myself through the tribunal.

“I feel that I am guilty of one thing, protecting Leeds United since I took charge of the club.

“I ask the players, manager and my staff to continue to work with loyalty and professionalism and to keep fighting for the club everyday on and off the pitch.

“I am sure that the public in this country and the free press will take the time to look into this case and find the truth.”

Cellino has divided the Elland Road fanbase during his two-and-a-half-year tenure with the sacking of six coaches and a number of off-the-field incidents.

He was suspended by the Football League in 2014 after being found guilty of tax evasion in his homeland and this year had another ban overturned.

Cellino’s company Eleonora Sport took full control of Leeds in September but there has been growing speculation over his future at the club in recent months.

Italian businessman Andrea Radrizzani last week confirmed his interest in a 50 per cent share of Leeds with a view to buying the Sky Bet Championship club outright next summer.

The co-founder of media rights group MP & Silva claimed he was in “advanced negotiations” with Cellino.