Goalscorer taken off as precaution, says Liverpool manager, but may face West Brom 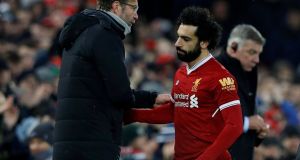 Mohamed Salah may be next in line for Jürgen Klopp’s rotation policy after the Liverpool manager substituted his leading goalscorer against Everton as a precaution against a hamstring problem.

Klopp has defended his decision to make six changes to his starting lineup for Sunday’s derby and to substitute the 19-goal Egypt forward at 1-0. Omitting Philippe Coutinho, Roberto Firmino, Emre Can and Georginio Wijnaldum against Everton was, he said, based on “a little information” from after the 7-0 rout of Spartak Moscow four days earlier. However, Klopp confirmed the two Brazilians “could have played” on Sunday and all four may start Wednesday night’s Premier League game at home to West Bromwich Albion.

Klopp was also criticised for substituting Salah against Sam Allardyce’s negative team. But he has disclosed that Salah was replaced by Firmino because of a hamstring scare and remains available to face Albion as the problem was not aggravated.

Klopp insists he never revealed Salah’s problem or the risk of starting Coutinho and others after the derby as he did not want to be seen as making an excuse for the 1-1 draw.

“I have 500,000 pieces of information and I have to make a decision; I cannot write a book before each game,” said the Liverpool manager, who remains adamant Dejan Lovren did not foul Dominic Calvert-Lewin for Everton’s late penalty. “I do not want to say [it was a risk to play Coutinho and Firmino] as that would sound like an excuse and I don’t need an excuse.

“I find it funny that we talk after this game about that, but we did not speak about it after the 5-1 or 3-0, why they did not play [the wins at Brighton and Stoke when Salah, Coutinho and Sadio Mané did not all start]. This is one game we should have won they did not play. We play it 10 times and we win. We had a bit of information but, come on, it would sound like an excuse to me.

“I took Mo Salah off because he felt the hamstring a little bit. Then everyone said: ‘How can you take him off?’ I do not go out and say: ‘Because he is close to being injured.’ He is not injured at the moment, thank God. Hopefully we took him off early enough. We have to do it. Seven games in 21 days before Everton and now six games in 18 days. It is exactly the same. We need the best quality we can have before each game. We cannot ignore the number of games.”

Klopp has made more changes to Liverpool’s starting lineup this season than any other Premier League manager, 59 in total. He admits the rotation policy stems from trying to avoid a repeat of last January, when Liverpool slipped out of the title race and both domestic cup competitions, and from seeking to maintain a challenge in the Champions League.

“That’s why we wanted to bring the players we brought in,” he said. “We have two injuries in the centre-half position now so it does not give us the opportunity. We have to more or less play the same all the time. We have a little information after a game and sometimes that leads to a decision that you should not go with the risk of this player or that player. Sometimes you have to ignore it because the player has to go through and play. That is how it is. We have to make these decisions.

“I have said in the future of football there will be more rotation because no one will take away the number of games. It is quicker, more intense, with more sprints, more high runs, less breaks and so many things. It is going in one direction and you have to react. That is always how I saw it, but you need the opportunity. We will see how it is in the next few games.” – Guardian service