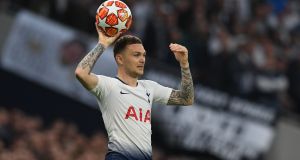 Kieran Trippier is on the brink of sealing a move to Atlético Madrid in a deal worth £20 million (€25m) plus add-ons and he has been given permission by Tottenham to travel to the Spanish capital for a medical.

The full-back, who starred for England at the World Cup in Russia, endured a difficult season last time out and Mauricio Pochettino, the Spurs manager, has decided to cash in on him as he reshapes his squad for what he has called the “next chapter” of his tenure.

Atlético want a replacement for Juanfran, who they officially released last month, and tried to take Nelson Semedo from Barcelona only to be rebuffed. They have monitored Trippier for some weeks, registering their interest with Spurs and they have now made their move.

Spurs have excused Trippier from their team flight to Singapore on Wednesday – where they will step up their pre-season preparations – and, were the deal to go through, Pochettino would be left with Serge Aurier and Kyle Walker-Peters as options as right-back. He is also confident that Juan Foyth, nominally a centre-half, can play in the position.

Spurs remain interested in Fulham’s left-sided player, Ryan Sessesgnon, together with his twin brother, Steven, who plays at right-back. Tottenham have already broken their transfer record with the £55m capture of Tanguy Ndombele and have also completed the £10m purchase of Jack Clarke, who has been loaned back to Leeds, but any moves for any other targets such as William Saliba of Saint-Étienne or Real Madrid’s Dani Ceballos would likely to have be funded by sales. - Guardian