Ken Early: Why does Wenger still indulge players like Özil?

Yet again the Arsenal manager blamed the referee, but his men were simply outplayed 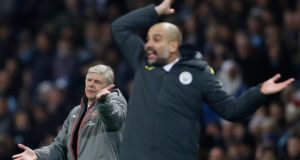 As Manchester City have struggled for form in recent weeks, Pep Guardiola has found himself dispensing rather more congratulations than he had bargained for. Yesterday, at least, he didn’t have to congratulate another victorious opponent. Instead he congratulated the Manchester City fans for remaining in the stadium until the final whistle.

“I’m so happy for the fans,” Guardiola said, “We had the spirit, we didn’t receive complaints from our fans, they enjoyed it. They stayed until the end of the game, normally they leave 10 or 15 minutes before the end but today they stayed.”

He therefore became the second of the recent wave of big-name managers to demand more from his fans, after Jurgen Klopp, who has frequently challenged Liverpool supporters to make more noise, both in press conferences and from the sideline during matches. It appears that the famed intensity of the Premier League strictly applies to what goes on out on the pitch, rather than in the stands.

Guardiola knows by now that the one time Premier League fans aren’t lacking intensity is when they are criticising managers who have lost their last game. Losing is especially problematic for a clever-clogs foreigner like Guardiola in tired-of-experts Brexit Britain. If he wasn’t already aware of it, the last couple of weeks will have opened his eyes to how much some people cherish the dream that the muscular world of Premier League football is destined to defeat him.

With Sergio Agüero and Fernandinho suspended, Guardiola improvised a strikerless attacking line of Kevin de Bruyne, Raheem Sterling and Leroy Sané. Sterling was front and centre, a position he has filled a few times at City and Liverpool without ever looking like a natural. Guardiola was probably hoping Sterling could do for his team what Alexis Sanchez, a player of similar size and build, has been doing for Arsenal in a similar role this season.

But Sterling, who has just turned 22, has yet to develop the cunning and all-round game awareness of the 28-year old Sanchez. He missed his only clear chance, a far-post header from a typically brilliant Kevin de Bruyne cross, and generally seemed unsure of where he should be running. At the end of the first half it looked like another failed Guardiola gamble; maybe he would have been better off picking Kelechi Iheanacho, who is even younger than Sterling but at least is used to playing up front.

Guardiola would eventually introduce Iheanacho, but not until much later in the game. Sterling played most of the second half on the right wing, making little impact on the game until, without warning, he decided it.

The key moment came on 71 minutes when de Bruyne’s brilliant early pass set Sterling free down the right, way in advance of most of his team-mates. Sterling was alone against the Arsenal defence, with only David Silva arriving very late in support. This isolation seemed to simplify matters in his mind: don’t worry about picking the right pass, this time it’s down to you. For once he acted with decisive conviction, cutting inside and hammering a surprise left-footed snap-shot past Cech at his near post.

Arsene Wenger complained about both City goals being offside. The first goal was not offside, but level. For the second goal David Silva had run into an offside position as Sterling shot, but he was not in Petr Cech’s line of sight and it was reasonable for the referee and his assistants to conclude that he was not interfering with play.

Ronald Koeman sarcastically remarked last week that whenever he beats Arsenal it always seems to be the referee’s fault. Once again, Wenger was engaged in distraction. His team had simply been outplayed, particularly by de Bruyne, who created seven chances – three more than the entire Arsenal side.

The worst player on the field was Mesut Özil who, alone among players who started the game, did not make a single tackle or interception. Özil is currently negotiating with Arsenal on the terms of a new contract, which could be worth more than £200,000 a week.

Arsene Wenger has talked a lot in recent times about how the situation at Arsenal has changed since the years when they were burdened by stadium debt and were forced by financial considerations to let players like Samir Nasri, Cesc Fabregas and Emmanuel Adebayor leave. Arsenal, he says, are now an apex predator in the transfer market food chain, a superclub with the resources to attract and keep the very best players.

If that is true, it makes you wonder why they are still prepared to indulge the inconsistency of a player like Özil, who is always capable of a flash of genius against Ludogorets, but usually disappears in difficult matches such as yesterday’s. There is a notion that keeping Özil will help Arsenal to retain the services of Alexis Sanchez, who is likewise bargaining for a massive pay rise.

You wonder about the logic of that. There can be nothing more infuriating for a player like Sanchez, whose physical commitment to the cause is absolute, than to turn around after chasing down another opponent only to see his most gifted team-mate standing there taking one of his regular breathers. If Arsenal really have become a superclub, they can surely afford better than this.