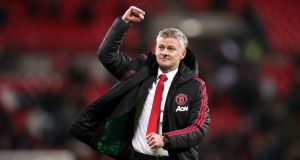 When Manchester United asked Ole Gunnar Solskjær to come in as caretaker manager, it was clear what they were looking for.

Nobody was expecting salvation. All they were hoping for was relief. Solskjær was not so much a coach as a living, breathing symbol of United’s past greatness. His task was to get people feeling good about themselves again, to put his arm around his players’ shoulders, look into their eyes and say “Lads. We’re Manchester United”.

From the point of view of United’s directors, Ed Woodward and Richard Arnold, it also helped that Solskjær came across as a reasonable sort of person who would be unlikely to, say, mount a media onslaught against the club over the lack of January signings, or compile lists of statistics proving that Manchester United lacked the “football heritage” to succeed.

He always put the club first when he was a footballer and it was a safe bet he’d keep doing so as a middle-aged manager. Don’t underestimate the attractiveness of basic humility to directors who had spent the previous two and a half years quailing under the lash of Jose Mourinho.

Solskjær was announced as United manager 26 days ago. Since then they have won six matches out of six, scoring 17 and conceding three, qualified for the fourth round of the FA Cup, and drawn level with Arsenal in fifth place in the Premier League.

The architect of United’s victory was Pogba, whose quick flighted pass played in Rashford for the winner

If the first four league wins were against Premier League cannon fodder, the fifth, away to Spurs, ranks as United’s best away performance since the bizarre 3-2 win at Manchester City that forced City to postpone last season’s title celebrations.

It wasn’t the first time in recent memory that United had won a big match in London thanks to some superb midfield play by Paul Pogba and a David de Gea miracle show: Mourinho’s United had a 3-1 victory over Arsenal at the Emirates in December 2017. But that night Arsenal had 16 shots on target and United only four, and United only won because the inspired de Gea set a new Premier League record of 14 saves.

The Spurs game was similar in that de Gea made 11 saves in the second half alone, which was more than any goalkeeper had made in any other league game this season.

But United had eight shots on target themselves, and Marcus Rashford’s 44th minute goal had been foreshadowed by several similar situations in the first half. This was a far more even match.

The architect of United’s victory was Pogba, whose quick flighted pass played in Rashford for the winner. Last month, after dropping Pogba for the defeat at Anfield that proved to be his final match in charge of United, Mourinho said that if a player played badly for him and well for a different manager, that meant the player must be “dishonest”.

As Pogba pointed out after yesterday’s game, tactics also have something to do with it. Mourinho’s tactics in big away games seldom varied from a predictable template; wingers asked to pull deep and play as auxiliary full-backs, three defensive midfielders and Romelu Lukaku as the target man up front.

Under Mourinho, United could not have scored the goal they scored against Tottenham, not because Pogba would dishonestly refuse to play such a nice through-ball for a manager he didn’t like, but because he would have had nobody to play it to.

Rashford, if he had been selected, would have been supporting his right-back on the far side, not hovering on the shoulder of Spurs’ last defender. In the Mourinho system only Lukaku would have been ahead of Pogba and in recent months Lukaku has not been making too many of the passes to him look good.

Because of his price-tag and extrovert personality, Pogba is always among the first players to be criticised when United fail, but too often he has been judged without reference to the context. It turns out he looks a lot better when United’s coach allows more players to join him in the attacks.

If the carefree nature of Solskjær’s first few wins suggested that the job José Mourinho had been doing was actually worse than even his harshest critics had suspected, Sunday’s win was the first that made a strong case that Solskjær should become the next permanent manager.

In the first half he tactically out-thought Mauricio Pochettino, who was too slow to respond to the obvious danger that Rashford and Martial were posing on the counter-attack.

In the second United had de Gea to thank for preserving the lead, but they also had chances to score more themselves. Solskjær’s players also deployed tactics of time-wasting and gamesmanship that reminded you they were coached by a man who once ran the length of Old Trafford to hack down Newcastle’s Rob Lee before he could shoot at goal. If anything, it was Pochettino’s side that looked naive.

For Pochettino it was the sort of defeat that you could imagine shaking his confidence in the future of the Spurs “project”. Is Hugo Lloris still good enough? Will Kieran Trippier ever be? Is Jan Vertonghen coming to the end? How much would it cost to replace or upgrade key players like these? And what chance of getting that money when there is an overdue stadium to be paid for?

Perhaps the most significant moment came in the very last action of the game, when Harry Kane went down with an ankle injury that Pochettino later admitted “could be a big problem for us”.

Spurs already knew they would be missing Heung-Min Son over the coming weeks as he represents South Korea in the Asian Cup; if Kane is also forced to sit out these matches then Spurs will struggle to get results.

This will not make his case for taking over from Solskjær any more persuasive. But by the end of the season, “Pochettino” could be the answer to a question nobody at United is still asking. In Solskjær they have already chanced upon the solution.