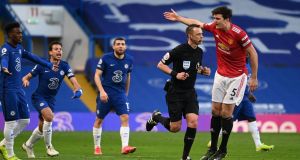 Manchester United’s Harry Maguire remonstrates with referee Stuart Attwell after his decision not to award a penalty against Chelsea following a VAR check of an incident at Stamford Bridge. Photograph: Andy Rain/PA

Another Super Sunday hype match, another dismal non-event, as two Premier League titans, in the absence of the competitive tension a crowd would have brought to bear, settled for a goalless draw that suited both sides.

“A high-quality game” said Thomas Tuchel after overseeing his side of the non-aggression pact, and it’s true that the fake crowd noise piped in on the main match feeds sounded as enthusiastic as ever.

6 Vaccination and modified behaviour point us back towards normality

9 Una Mullally: How to make Dublin’s north inner city better for the locals

14 Depop: The social shopping app that has thrived in Ireland during lockdown

18 Ken Early: It’s time for Alexander-Arnold to move to the middle

19 Mary Coughlan revisits her past: ‘It was everywhere. Bags of cocaine, champagne and tequila’

20 My Bloody Valentine: Very loud, very fuzzy, and heading back to their Irish studio

25 We would drop to our knees after our tea of soda bread, country butter and hang sandwiches

32 School homework: Does it have any benefit at all?

38 Pandemic relocation: The couple who abandoned Dublin for home in Co Mayo