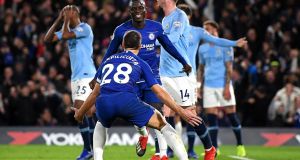 How do you solve a problem like N’Golo? On the evidence of a bruising, thrilling night at Stamford Bridge, Maurizio Sarri’s attempts to transform the best covering midfielder in the world into a withdrawn right-sider may or may not succeed. But it won’t be for want of manically committed effort from the man himself, who provided a lesson in making a plan work, even when that plan seems to push you to the fringes.

For the opening 44 minutes of this 2-0 Chelsea win, Manchester City had eased around like a swarm of blue-shirted princelings, scything through what was once Kanté country. Just past the half hour there was a beautiful moment as Riyad Mahrez walked one way in the centre circle, then shuffled back the other, making Antonio Rüdiger hare off into the wrong movie set, a man suddenly speaking the wrong lines and dancing the wrong steps.

Somehow Chelsea blocked and covered and kept their goal intact. On the right Kanté stayed closer to Jorginho than he has, but without much control or synergy between the two. The story here looked like becoming the same old story, the one where the light-blue shirts simply take the day away.

Before this game there had already been some cautious talk about City going the Premier League season unbeaten. Football has always had a wonky sense of humour. In the event a team who breathe and sweat and burp out goals in their sleep were outscored by a midfielder with two Premier League goals since September 2016; with a second added by David Luiz, who was solid and orderly where he seemed to be playing in great flapping brown clown shoes against Tottenham a fortnight ago.

Two wonderful passes made Kanté’s goal just before half-time. First David Luiz pinged a hard flat crossfield missile from the left-back position on to the foot of the scampering Pedro. The ball found its way to Eden Hazard, who did something sublime, waiting a beat, allowing the players in front of him to move, then rolling the ball into a paddock of space he alone seemed to have spotted.

Kanté is of course borderline psychic when it comes to reading the flow of the ball in tight spaces. As the ball trickled across he came rushing in off his right-half position to slam it high into the net past Ederson.

The goal was Chelsea’s first shot on target. It was also Kanté’s most assured touch of a half that had seen him reduced to a frantic figure at the edge of things. Kanté had been dispossessed four times. He had skittered about wildly in search of a space to fill, a tackle to make. He had completed nine passes. And yet, as ever he had just kept on coming.

There has already been a great deal of harrumphing about Sarri’s attempts to play Kanté in a slightly different role, replacing him in the centre with the more ponderous, more artful Jorginho.

Understandably so. Kanté has been a darling of the Premier League, where his spidey-sense for interceptions and brilliance in the clinches have fitted the tempo and texture of the game so well. It is an easy issue to jump on. We can all see what Kanté does. We can all see that Jorginho is another kind of player. Infamy! Coming over here, confusing our much-loved French defensive pivots.

This is of course not quite as simple as some would make it. To ask Sarri to move Jorginho from the base of his midfield is to ask him to abandon the sense of how he wants his team to play. It is to ask him to stop doing the things that brought him here, the deep passing game that is central to his plans.

Pep Guardiola had a similar reaction in his first year in England. How, we shrieked, could he persist with this tactic of dinking it around at the back? Why weren’t there more tackles? Except, without that process he wouldn’t have created the most sublime club football machine of the last few seasons. Time: it is the one thing English football refuses to give you.

Stamford Bridge had been a chilly, breezy boisterous place before kick-off, the air lashed with tongues of fire from the pitchside flamethrowers. As a right-sided player Kanté looked like a very good central defensive shield in those opening exchanges, intercepting the ball then finding himself robbed, or his passes misplaced.

An hour later Kanté had begun to surge down the right wing like an auxiliary wing-back, three times finding holes outside Fabian Delph. And something did shift here. City were still sublime on the ball but Sarri’s plan to hold a deep line and hustle hard kept them at arm’s length. Meanwhile Kanté showed that every plan can be made to work with a little willing; a player who remains the most generous of professionals, a lesson in willing, warrior spirit and pure footballing intelligence.

1 Saracens to accept second 35-point deduction and effective relegation
2 Welcome to Iten in Kenya – home of champions and cheats
3 St Michael’s conveyor belt showing no signs of slowing down
4 Ulster look to secure quarter-final place with win against Bath
5 How do Klopp’s Liverpool measure up against greats of past?
Real news has value SUBSCRIBE