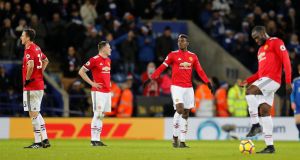 Jose Mourinho labelled his Manchester United side “childish” after they conceded a last-gasp equaliser in a 2-2 draw at Leicester.

United had cancelled out Jamie Vardy’s opener with Juan Mata’s double and then missed chance after chance to put the game to bed.

They eventually paid the price as Harry Maguire levelled for 10-man Leicester, who had Daniel Amartey sent off, with almost the last kick of the game.

Asked how his side did not pick up the three points, the Portuguese manager said on Sky Sports: “I don’t know, we didn’t win because we missed incredible chances, I would say joke chances, and then in the last second of the game we make a big defensive mistake.

“It is an accumulation of mistakes in an easy match to win.

“The team was playing well and in the second half the result should have been four, five, six. But the reality is that it is 2-2.

“Sometimes you make mistakes and you are not punished, but we were punished.

“We were punished by our mistakes, what more can I say? It was an easy match to win, but when you miss big chances in front of goal and not only that but also childish loss of possession then you are punished at the end.

It caps a bad week for United as they are now 13 points adrift of Premier League leaders Manchester City, and the draw comes just three days after they were knocked out of the Carabao Cup by Sky Bet Championship side Bristol City.

But Mourinho admits he is still happy in himself.

“I feel great,” he added. “Seriously. It’s one thing to be angry as a manager and it is another to feel great as a man. I feel great, I work hard.”

“It feels great to get a last-minute draw. Kasper [Schmeichel] has pulled us out a few times and did it again today,” Maguire said.

“It was a great moment today and we will go and enjoy it. We had to stick with it, it was crucial to keep it at 2-1 and when we kept it at 2-1 for as long as we did we knew we would get a chance.

“Thankfully it fell to me and I was able to put it away.

“It’s one of those games that feels like a victory, but it’s a point, it’s a good point against a good side.”