José speak: Mourinho’s United tenure in his own words

Mary Hannigan looks back at some of the good, bad and ugly of the manager’s quotes

From his early days at Chelsea to his final days at Manchester United, Jose Mourinho's press conferences in England were rarely dull. Video: David Dunne 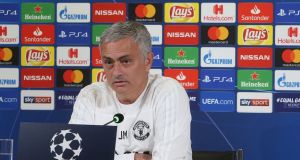 “One of the good things is that Rooney finally scored a goal.” – Finding some consolation in a Europa League defeat by Fenerbahce.

“He had a good performance, but it was his body with my brain. He was in front of me and I was making every decision for him. He cannot play with my brain.” – And even when Shaw played well, Jose somewhat struggled to give the lad the credit.

“When I saw the penalties going to the sixth, seventh takers, I knew that we were going to be in trouble with Jones.” – On his hunch that Phil would fail to insert his spot-kick in the back of Derby’s net during their League Cup shoot-out.

“There is a difference between the brave, who want to be there at any cost, and the ones for whom a little pain can make a difference.” – After Chris Smalling and Shaw declared themselves unfit for a trip to Swansea.

“He scored a great goal that Harry Kane would have been proud of.” – Saluting Phil Jones’ deadly finish in the game against Spurs last February. Alas, it was to his own net.

“Everybody knows Marouane is not Maradona.” – Just when the Fellaini lad was beginning to feel like Diego.

“Matic was an island of personality, desire and control surrounded by lack of personality, lack of class and lack of desire.” – Only Nemanja escaped his wrath after a ropey performance against Brighton in the FA Cup.

“I don’t think it’s about us getting the best out of him, it’s about him giving the best he has to give. I think the World Cup is the perfect habitat for a player like him to give their best. Why? Because it’s closed for a month, where he can only think about football.” – That time he struggled to congratulate Paul Pogba on winning the World Cup.

“They are lacking maturity on a personal level ... they are spoilt kids now, the kids of today have a different life, an easier environment ... we’re talking about Luke Shaw, Martial, Lingard, Rashford – young, big potential, but character, personality, they lack a little.” – Lest his youngsters were gaining some confidence, he opted to put their character through the mangler.

“I think Mr Wenger has respect from all of you. I don’t think I have. Especially because my last title was 18 months ago, not 18 years ago.” – He just never left poor Arsene alone.

“I don’t behave as a clown on the touchline. I prefer to behave the way I am doing it, much more mature”; “What never happened to me, and what will never happen to me, is to be suspended for match-fixing....”; “I’m not going to lose my hair to speak about Antonio Conte.” – His war of words with Conte was so juicy it even included a reference to the Italian’s hair transplant.

“My reaction is if you are a rich club you can buy top players, you cannot buy class.” – His response to Manchester City’s Amazon documentary which wasn’t kind to Jose’s ‘park the bus’ tactical approach.

“I heard the worst manager in the history of the Premier League, Frank de Boer – seven games, seven defeats, zero goals – saying that it was bad for Rashford to be managed by me because he would never play. Maybe with him, he would learn how to lose.” – The mother of all miaows.

“There was an evolution in the other clubs; there was no evolution in this club. In all the areas that make a team successful I think we stopped in time. That was quite an empty period in the club.” – His salute to David Moyes and Louis van Gaal’s reigns at United. You’d imagine they’re both chuckling now.

“I find it unfair, we should have much more points than we have …. so many draws that we deserve victories. If you could transform these draws into victories we would be very close to the top of the league.” – If the Queen had...

“I have already won three titles here.” – He counted the Community Shield as one of his United titles. Seriously.

“I am happy. I think 17 matches unbeaten is amazing. We didn’t lose. It was 1-1. I only saw two goals.” – Counting a 2-1 defeat by Hull City in the League Cup as a draw because he thought one of their goals was iffy.

“Manchester City are a very good team, but they are protected by the luck … the Gods of football are behind them.” – After losing to City at Old Trafford last year when the visitors were so lucky they had 65 per cent of the possession.

“Do you know what was the result? Three-nil. Do you know what this means [holding up three fingers]? Three-nil, but it also means three Premier Leagues and I won more alone than the other 19 managers together. Respect, respect, respect.” – And following a clobbering by Spurs at Old Trafford in August, José attempted to comfort the very same fans by, eh, reminding them how many titles he’d won with Chelsea.

“I am the manager of one of the greatest clubs in the world, but I am also one of the greatest managers in the world. I repeat, I won eight titles, in Italy, Spain and England. My second position last season is one of my greatest achievements in football, I think.” – There was a time when first was first and second was nowhere for Jose – not at United, though.

“Let me send a message to my lovers and say that I played Champions League for 14 years and I qualified 14 times. And the two years where I didn’t play Champions League, I won the Europa League twice, so in 16 years, 14 times I qualify and twice I play Europa League and I won. Just a little curiosity for my lovers and the lovers of the stats.” – Reminding anyone who would listen last month that he used to be a half decent manager.

“They say I’m in danger [of being sacked], but I don’t think so. If they send me away, do you have any idea how much money they would have to give me? Ah ah.” – Very much doubting back in September that United would fire him because they’d have to pay him too much loot. So much for that.