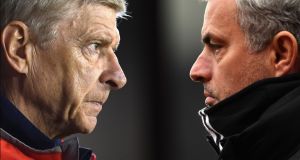 A common sight at the Emirates Stadium in the past decade has been the away team storming into acres of space to seek reward on the counterattack, with Arsenal’s defensive players nowhere to be seen. The weakness has often flared in the biggest games, and one of the best examples was the goal Cristiano Ronaldo scored to clinch Manchester United’s victory over Arsène Wenger’s side in their Champions League semi-final in 2009. United ruthlessly exploited Arsenal’s gung-ho approach, breaking at exhilarating speed, Ronaldo hurtling into the area to finish off a move he had started with a backheel deep on the right flank.

It was a regular occurrence when Alex Ferguson brought his team to north London – take the goals Wayne Rooney and Park Ji-sung scored in a 3-1 league victory in January 2010 – and it would be logical for José Mourinho to construct a similar plan when United pay Arsenal a visit this evening. Plenty of other top sides have followed the Ferguson blueprint, after all. Monaco pounced on two occasions on the break when they knocked Arsenal out of the Champions League in 2015, and Barcelona exposed the same flaws a year later. There were 20 minutes to go in a goalless first leg when, inexplicably, Nacho Monreal was left as the last man back, unsure about whether to stop Neymar’s dribble or mark the forward to his left. Neymar’s pass was perfect, Lionel Messi put Barcelona ahead and the tie was effectively over.

Such tactical naivety and indiscipline were startling at first but it came to feel predictable when it kept happening. Arsenal rarely demonstrated a willingness or ability to manage games. Streetwise opponents would lay the trap and Wenger’s daydreamers would wander into it.

Yet it is never too late to learn, and the Emirates is a happier place for Arsenal these days. They will always seek to be progressive, but there have been signs of more humility recently. Wenger admitted as much after the 5-0 win over Huddersfield Town on Wednesday night, saying that switching to a 3-4-3 system in April had made a difference.

“It’s all linked a little bit with confidence and the fact that we have been more stable defensively and a bit more patient maybe in our game,” Wenger said. “We are a team who puts many players in front of the ball when we attack so we are sometimes vulnerable on the counterattacks. On that front maybe the fact that we play with three centre-backs helps a little bit to be caught less on counterattacking.”

There is, of course, always a need to tread carefully with Arsenal, who have an unfortunate habit of letting themselves down just when they seem to have turned a corner. They are back in the top four after three consecutive wins, with momentum generated by that impressive dismissal of Tottenham Hotspur a fortnight ago, but it is only a month since their defensive structure fell apart against Manchester City. They were abysmal, too, at Liverpool in August and optimism still has to be framed in a cautious light. Aaron Ramsey and Granit Xhaka can be a flimsy partnership in midfield. But if Wenger is to be believed, Arsenal will be ready if United look to absorb pressure and wait for gaps to appear.

The French man has faced Mourinho too many times to expect anything else. Perhaps United will surprise everyone by seeking to dominate possession but that would be out character in an away game against a rival. Their ideal scenario is for Arsenal to start chasing a goal and lose their shape, leaving themselves vulnerable to raids from Romelu Lukaku, Marcus Rashford, Anthony Martial, Paul Pogba and Jesse Lingard. “My opponent didn’t open the door for me to win the game,” Mourinho said after United’s tedious 0-0 draw at Liverpool two months ago. “I was waiting for him to give me more space to counter but he didn’t give me that.”

Given his history with Arsenal, Mourinho may be more confident about the chances of them making a mistake. Wenger is forewarned, though. “They have a lot of power up front,” he said. “Lukaku, now Ibrahimovic is back, Rashford, Martial. You cannot say these guys lack power. So our defensive performance will certainly be important, to be well organised when we don’t have the ball against them. They are very strong on that front. We have to be well organised for that.”

United have not won at any of their “big six” rivals under Mourinho, managing one goal and three points in seven games, but Wenger will not underestimate their threat. “They have just scored four at Watford,” he said. “If you look at their players they can be dangerous everywhere.”

Wenger, however, will trust that his forwards can trouble United, even though Alexandre Lacazette will be missing after tweaking his groin against Huddersfield. Lacazette’s absence is a blow, robbing Arsenal’s attack of speed and ruthless finishing, but Olivier Giroud scored twice after replacing him at half-time, Alexis Sánchez’s motivation is returning and Mesut Özil is in inspired form.

The challenge for Özil, whose contract runs out next summer, is to keep his intensity high. There has been an edge to his game in the past fortnight, more hunger out of possession. The German is playing like someone with a point to prove, and Arsenal will need more of the same when they go in search of a 13th consecutive home win. They have silenced talk of a power shift in north London, moving four points clear of Tottenham, but they cannot relax now. They have not achieved anything of any substance yet. If it really is true that Arsène still knows, there is no better way to prove it than by outsmarting Mourinho. – Guardian