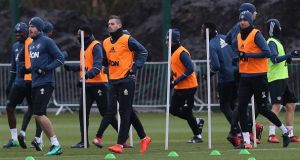 José Mourinho has revealed that Manchester United rejected West Bromwich Albion’s £13m offer for Morgan Schneiderlin and that Anthony Martial will not go on loan to Sevilla.

Last week Tony Pulis, the West Brom manager, confirmed his club made a bid for Schneiderlin, which is thought to have been £13m. But Mourinho said on Friday: “We have not received one single offer that we are going to accept.

“I don’t want to sell players. The club and the board is totally with me, but as I told before, if a player is not having lots of minutes and really wants to leave, we have no right to stop him leaving if the conditions are our conditions.”

Mourinho, who also stated Wayne Rooney’s muscle injury rules him out of the visit of Middlesbrough on Saturday, will only allow one player to leave on a temporary basis – the goalkeeper Sam Johnstone, who is of interest to Sunderland and Aston Villa.

Martial’s agent had claimed he has been discussing a temporary move to Sevilla but Mourinho said: “Sam Johnstone is the only player that I allow to go on loan. He doesn’t play one minute and he needs to play. We have a young keeper in Joel [PEREIRA], he played many minutes in the last six months in Portuguese PL, so now is the time to play six months for Sam.”

On Saturday Mourinho hopes to guide United to a fifth successive league win for the first time since February-April 2015 when facing Aitor Karinka’s side, the Spaniard having been his No2 when previously in charge of Real Madrid.

Mourinho said: “He is my friend and a real friend. I always want him to win and he always wants me to win, but tomorrow is the first time where I want to against him. That’s football. Sometimes brothers against brothers happened, a father against his son maybe, and that would be even more difficult. For 90 minutes, he and I want to win and that is it.”

Of United’s winning sequence, Mourinho said: “The momentum of playing well comes from a long time ago. It is difficult to remember the last match we didn’t play well. Even playing for results that should not be, but the reality is that we managed to win the last five [in all competitions] and we need points. Let’s try for three more points.”

United are in sixth place on 33 points, four behind Arsenal in the final Champions League spot.