José Mourinho: ‘We are not letting Arsenal beat us 6-0’ 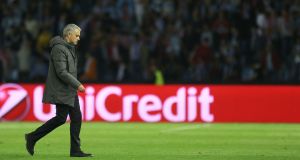 José Mourinho has defended his decision to field a weakened team against Arsenal on Sunday, saying that the Manchester United side he picks will “fight for a result” at the Emirates Stadium.

United, who beat Celta Vigo 1-0 in the first leg of their Europa League semi-final on Thursday, are a place and five points ahead of Arsenal (who have a game in hand) and Mourinho said he is aiming to extend that gap with a win , despite the intention to rest several players.

“We are going to try. We are not going to Arsenal to say ‘beat us’ or ‘beat us 5-0 or 6-0.’ We are going there to fight for a result. But it’s impossible not to rest players. I cannot do it in another way. If Celta was playing with their best team, if Celta was fighting for important things in La Liga, we would go in the same circumstances. But I cannot now play with the same team that played at Celta. And then repeat it again next Thursday.

“So, we have to be human with the players, we have to be sensible and [use]common sense in relation to our situation in the Premier League, and I think the last match against Swansea [a 1-1 draw]was our last chance to fight for a top-four place, so I am going to rest players, sure.”

Mourinho also welcomed Arsène Wenger’s wish for peace by stating there is no problem between them. The pair have endured a fraught relationship since the Portuguese entered English football as Chelsea manager in 2004 but on Thursday Wenger had said: “I am open always in life to everything, for peace.”

Mourinho, after the game in Vigo, said: “He doesn’t need to say he is ready to make peace. He doesn’t need to because there are no problems. In the last match at Old Trafford [a 1-1 draw in November], we shook hands before, after – I remember that I still met him in the corridor for the press conferences, we shook hands again. So for me not a problem at all and I think he will be really pleased with me that I am going to change my team against Arsenal. I think he’ll be really happy with me.”

The two managers have a history of clashing. In October 2005 Mourinho branded Wenger a “voyeur” and suggested the Frenchman should concentrate on Arsenal rather than take too much of an interest in Chelsea.

In October 2014 at Stamford Bridge, Wenger pushed Mourinho following a tackle by Gary Cahill on Alexis Sánchez, leading the Portuguese to say: “I told him: ‘Here you do that, you know I can’t react, but I will meet you one day in the street.’” Earlier that year he described Wenger as a “specialist in failure” after the Arsenal manager claimed Mourinho was playing down Chelsea’s title hopes because “they fear to fail”.

Despite this history Mourinho said: “He doesn’t need to make peace. When there is peace, we don’t have to have a problem. I am a big boy, I’m in football all my life, I know a problem on the pitch the next day is not a problem at all.”

Mourinho also suggested David de Gea could play in the Europa League final should United reach it despite Sergio Romero being the regular No1 in the tournament so far.

“I don’t like that complete separation. But Sunday, David plays. We have two fantastic goalkeepers, we have a third goalkeeper that I think will be the best Portuguese goalkeeper of the next generation [Joel Pereira]. We have great goalkeepers and [against]anyone in the world I trust [them]completely.”

Rory McIlroy makes a slick start to 2020 with opening 67 22:19
Wolves left to rue profligacy as Liverpool roll on 22:13
Annalise Murphy is runner-up in Melbourne as Round Ireland race takes shape 22:11
Mixed fortunes for Meadow and Maguire on LPGA seasonal bow 20:20
Kellie Harrington guaranteed a medal on her Bulgarian return 19:21