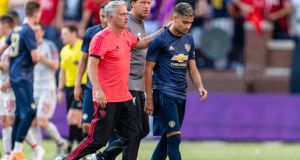 José Mourinho’s outburst after Manchester United’s 4-1 defeat against Liverpool may signal the Portuguese entering his endgame at the club. Even for a manager whose media appearances are often outspoken, the comments were extraordinary. He confessed disquiet at handing Ed Woodward, the club’s executive vice-chairman, a list of five players for “two new signings” and being unsure if even one of these will arrive by August 9th when the window closes.

Mourinho also declared he would not have paid to see the Liverpool game despite it being between English football’s fiercest rivals and so a centrepiece fixture of the International Champions Cup, a lucrative summer money-spinner. This came after a huge 101,254 were attracted to the University of Michigan Stadium, United having played to near half-empty stadiums in previous outings against Club América, San Jose Earthquakes and Milan. So how the Glazers, United’s American profit-led owners, view their manager effectively warning fans against attending the final tour match against Real Madrid in Miami on Wednesday should be clear.

He was not finished yet. How could Alexis Sánchez be “very happy with the players around him”, the 55-year-old asked in a crushing dismissal of younger squad members he is supposedly developing as future United footballers.

Mourinho then rounded on his captain Antonio Valencia for being unfit, the want-away Anthony Martial for not rushing back to the tour following the birth of his child, plus – oddly – the referee and assistants being sourced from “baseball”. There has also been continual moaning about starting the trip without 13 frontline players due to post-World Cup holidays.

In all of this there is a near mirror image of previous Mourinho third-term travails when twice at Chelsea (2004-07 and 2013-15) and Real Madrid (2010-13). Meanwhile the summer has seen only one major outfield signing in Brazil reserve midfielder Fred plus the untested 19-year-old full-back Diogo Dalot. Mourinho may have taken United to second place last year, a best finish since the 2012-13 title win, but they trailed by a record 19 points behind Manchester City. United were never serious challengers so what Mourinho must deliver in 2018-19 is clear: the chasm to Pep Guardiola’s men must be bridged and United must still be in the championship race come next May. In this context Mourinho’s media performance in Michigan can be viewed as a quasi-desperate roll of a dice to try to hurry Woodward into securing at least one of his centre-back and wide-forward preferences – and the preparing of ground should he not.

If there are echoes of classic third-term Mourinho, the difference this time is that his predicament is precarious. In both Chelsea tenures and in Madrid, Mourinho began year three with his stock sky-high as the league title had been claimed the previous seasons.

This summer his status at United is close to slipping terminally unless the side starts the season flying and continues through winter and spring. His words in Michigan followed the defeatist assessment earlier last week that United will struggle to defeat Leicester City and Brighton & Hove Albion in their opening two Premier League matches due to players having a shorter pre-season. Yet he omitted to mention Leicester have been seriously weakened by losing their best player, Riyad Mahrez, to City.

An irony for Mourinho is that he enjoys more autonomy at Old Trafford than he did at either Chelsea or Real. Woodward might not sign off every transfer request – Internazionale’s Ivan Perisic and Chelsea’s Willian may be a difficult ask at their asking price due to them being 29 – but Mourinho does not have to resist pressure regarding players foisted on him.

This was the situation at Chelsea and Real. In December 2006 Mourinho insisted he would never feel moved to play Andriy Shevchenko, who was viewed as a £30.8m vanity project of the owner, Roman Abramovich. His exit by “mutual consent” after limping into the September of his fourth year can be traced back to Shevchenko’s arrival with Michael Ballack also seemingly joining above his head.

A memorable soundbite came just before that departure in a barb about how Abramovich’s transfer policy prevented the buying of elite players. “Some are more expensive than others and give you better omelettes,” he said. “So when the class one eggs are in Waitrose and you cannot go there you have a problem.”

At Real, where the president often acts as a de facto director of football, similar issues arose. Mourinho signed a new four-year deal in summer 2012 after guiding the club to a record La Liga triumph. Yet the following campaign would prove the “worst of my career”, he said. There had been bust-ups with club favourites Iker Casillas and Cristiano Ronaldo and by May 2013 Real had lost the title to Barcelona by 15 points, were knocked out of the Champions League semi-finals, and endured defeat against Atlético Madrid in the Copa del Rey final.

His second Chelsea stint ended in similar fashion. The agreement of a new four-year contract on August 7th 2015 was followed the next day with a furious dispute with club doctor, Eva Carneiro, over her treatment of Eden Hazard during the season opener against Swansea City.

While Mourinho and Chelsea later settled with Carneiro regarding an unfair dismissal claim, that December he was sacked, clearing the way for his appointment at United two years ago. Since then there have been 10 major signings granted by Woodward and the Glazers. When compared to Guardiola’s 13 for a City squad that was of higher quality than United’s when the Catalan took over, Mourinho may have a point regarding transfer policy.

Yet United have twice eclipsed City’s record £60m outlay on Mahrez – for Romelu Lukaku (£75m) and Paul Pogba (£89.3m) – and while the board continue to back Mourinho there is bemusement at their manager’s off-message diatribes.

If the question is posed what Guardiola could do with the same squad as Mourinho – surely better than trailing by 19 points – the crux of what is fuelling the latter’s serial moaning may become clearer. This is the sneaking suspicion that United are about to fall further behind when Mourinho’s third Old Trafford season starts. And that the once “Special One” has become the “Powerless One” regarding his ability to duke it out at the very top. – Guardian service