Liverpool boss said he was reluctant to buy success before spending €84.5m on van Dijk 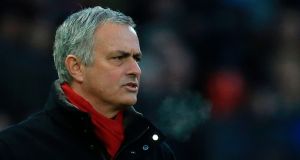 Jose Mourinho has reminded Jurgen Klopp about his comments regarding the transfer fee paid for Paul Pogba. Photograph: Lindsey Parnaby/AFP

José Mourinho believes Jürgen Klopp should be asked about his view that he would never wish to buy success after Liverpool’s agreement this week to pay £75 million (€84.5m) for Southampton’s Virgil van Dijk.

Manchester United’s manager pointed to the German’s comments, which came in summer 2016, following the centre-back’s acquisition, which is to be completed on January 1st.

Mourinho was clarifying remarks made following United’s 2-2 Boxing Day draw with Burnley at Old Trafford. The Portuguese stated that his near £300m spend at United was not enough and pointed to how Manchester City had invested in full-backs that were the usual cost of strikers.

“Did I say that?” he said. “You know, I think the one that speaks about it in a specific way has to be Jürgen. If I was one of you I would ask him about his comments about one year ago.”

In July 2016, as United neared the then world record singing of Paul Pogba for £89m (€100m), Klopp stated: “Other clubs can go out and spend more money and collect top players, yes. But if you bring one player in for £100m or whatever, and he gets injured, then it all goes through the chimney. Do I have to do it differently to that? Actually, I want to do it differently. I would even do it differently if I could spend that money. The day that this is football, I’m not in a job any more.”

Mourinho said: “I am not speaking specifically now about that case [VAN DIJK]because in Liverpool they do what they want to do and I am nobody to comment on what they do. The reality is that if they think that the player is the right player for them and they really want the player they pay his amount or they don’t have the player because that is the way the market is at that time.

“So when we compare now the amount of money certain managers and clubs spend and try to compare that – I am not saying with 10 years ago – but [even]three years ago it is to compare the impossible. You cannot compare the realities.

“Virgil van Dijk is the most expensive defender in the history of football – was he better than [Paolo]Maldini, [Giuseppe]Bergomi or [Rio]Ferdinand? You cannot say that – it is just the way the market is and you pay or you don’t pay. If you pay obviously you pay a crazy amount of money but if you don’t you don’t have the player. It is as simple as that, so no criticism at all about what Liverpool did, it is just the way it is.”

Mourinho also admitted that Romelu Lukaku needs a rest but he cannot offer this to a striker who has managed only four goals in his last 19 appearances.

“First of all, people don’t have to be grateful to Romelu,” said Mourinho. “I have to be, not you, not the supporters, not the pundits. I have to be, and the other day I mentioned he has played 19 matches in the Premier League. Now it is 20 matches for 90 minutes – I think for a striker, any player that’s absolutely incredible. But if you are a central defender, a holding midfield player, where you can control your energy, positional play, you can resist [exertion a little]. But for a striker to play 20 matches in the Premier League in 90 minutes I have to be grateful.”

Lukaku was culpable for goals in the derby defeat by Manchester City and the draw with Burnley. “Is he unlucky in our box in recent matches?” said Mourinho. “He was in the picture, but was not a direct influence. He was in the picture in some of the last goals we concede but this is a consequence of a player that really needs a little rest. But the guy is fantastic for me and for the team and gives absolutely everything and I’ve no criticism. No, I can’t rest him.”

Mourinho does not believe Lukaku and Zlatan Ibrahimovic can currently play together after the latter was replaced at half-time of the Burnley draw, the Swede’s first league start this season.

“It can happen [they play together] but to happen they need both to be in their best moment and they are not,” said Mourinho. “One is not because the situation in his team didn’t allow him to have any rest. The boy is tired, is physically a monster but not a machine and he’s feeling it.

“And Zlatan is a man with an incredible injury [serious knee]– imagine a man 36 years old and who has so many miles in high level football [to suffer this]. So it is not easy, we did that against Burnley, we will do that in some more matches if we need to do but for both to play together we need them to be at their best level.”

1 Rory McIlroy: Maybe I’m just not as good as I used to be
2 Gerry Thornley: Consistent trailblazers New Zealand once again ahead of the posse
3 Ken Early: PSG would be sensible final move for Ronaldo
4 A new breed of superstar - Collin Morikawa wins US PGA
5 Andy Sullivan on course for first tournament win since 2015
Real news has value SUBSCRIBE