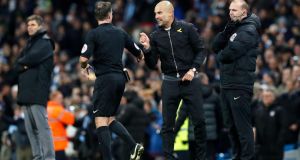 Manchester City manager Pep Guardiola (centre) is spoken to by referee Paul Tierney after his post-goal celebration during their win over Southampton. Photo: Martin Rickett/PA Wire

José Mourinho said he is “not surprised” Pep Guardiola received no sanction for going on to the pitch after Manchester City’s late winner against Southampton in midweek, though Manchester United’s manager was sent off for a similar act during his side’s victory at St Mary’s in September.

Guardiola’s infringement came after Raheem Sterling’s injury-time goal gave City a 2-1 victory at the Etihad on Wednesday. It was their 19th win in succession and whereas City’s manager was on the field for an extended period, Mourinho’s red card came after he put one foot on the pitch, though this was during play.

The Portuguese received no further action from the English Football Association, a tacit admission that the referee, Craig Pawson, made the wrong decision, which came in the closing seconds of United’s 1-0 win.

Mourinho was asked whether he was surprised Guardiola did not draw a similar punishment from Paul Tierney, who refereed City’s match against Southampton.

“Surprised? No, not surprised,” he said, though he would not be drawn on whether that was because he feels there is a different rule for him.

“You are asking me one question. If I am surprised, I say I am not surprised. The second question is nothing. It’s another one.”

Pressed on why he was surprised, Mourinho laughed. “You [his questioners] have team spirit and tactics,” he said. “I can’t answer to the second question. You know, if you are my friends, don’t ask me the question, because you know I get into trouble, so no.”

At the final whistle on Wednesday Guardiola also confronted Southampton’s Nathan Redmond in a truculent manner. The player issued a statement to say he had no issue with this, though the FA has asked Guardiola for his observations. Again, Mourinho chose to stonewall.

Today United are at Arsenal for the late kick-off in which Mesut Özil should feature. Mourinho has not ruled out making a move for the player in the summer, when the German’s contract expires at the Emirates. The Portuguese coached Özil at Real Madrid and has described him as the best number 10 in the world. The position is proving a problematic one for the United manager, who recently dropped Henrikh Mkhitaryan.

Mourinho has emphasised he is focusing just on the match rather than the title race as a whole – and likened the one-game-at-a-time approach to how tennis great Bjorn Borg was coached.

Asked if he saw the Arsenal match as ‘must-win’, Mourinho said: “I play a game at a time and I think that’s the way to do it. “Yesterday I was watching an interesting movie, Bjorn Borg versus John McEnroe, and Borg’s coach was telling him that all the time – ‘One point at a time, think just about one point’.

“And I tell my players, ‘Think just about the game’. “It doesn’t matter what comes after, what happened before. It is just this game. So now it is Arsenal. We don’t think how many points we are in front of them, how many we are behind the leaders. It is just Arsenal.”

Nemanja Matic’s availability is in the balance for tonight’s game because of a muscle problem.

“I hope he can play but I cannot guarantee it,” Mourinho added. “He is selected to go, let’s see the feeling before the match, let’s see the warm-up.

“I hope he can, I want him to, he wants to, but I cannot guarantee and [Marouane] Fellaini is not travelling with the team.”

Phil Jones, Eric Bailly and Marouane Fellaini will miss the trip to the Emirates due to injury. Defenders Jones (thigh) and Bailly have each sat out the last four games, while Fellaini was absent for Tuesday’s 4-2 win at Watford. Mourinho confirmed that none of the trio would be involved.