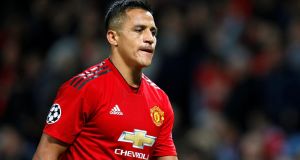 Manchester United’s Alexis Sanchez is likely to be out until January. Photograph: Phil Noble/Reuters

The good news for Manchester United supporters worried about the club’s ability to crack the top four is that at least José Mourinho has been made to feel special again. The bad news is that the manager was being sarcastic, referring to his persecution complex over being treated differently by the media than rivals and counterparts.

“In Manchester United, every time a player is not playing there is always a rumour, always a problem,” Mourinho said. “The player must have misbehaved, or the manager has had a fight with him. It only happens here, you make me feel very special because I am clearly different from everyone else. At Chelsea when Willian doesn’t play there is no problem with him and Sarri. It is never a problem when Gabriel Jesus doesn’t get a game at City, it is just a normal Pep decision. When Fabinho and Naby Keïta don’t play for Liverpool they still love Jürgen and Jürgen loves them. Here when Paul [Pogba] is on the bench it is a disciplinary issue. When Alexis is not playing he has had a fight with the manager. At this club players cannot have normal ups and downs, and the manager cannot coach or speak about his players.”

Warming to the same theme, Mourinho noted the criticism he received for his expression of disappointment when Marcus Rashford missed an early opportunity against Young Boys. “I was not happy a player missed a chance, that is all. The next day a friend sent me a clip of Cristiano Ronaldo missing a chance for United and Alex Ferguson shouting at him in his beautiful Scottish. That moment killed Ronaldo’s career, you know. He was never the same player after that.”

Mourinho confirmed Alexis Sánchez is likely to be out until January with the hamstring injury he suffered in training – “I don’t believe in curses but I must admit he has had a very unlucky six months” – and suggested United will not be spending much money in the mid-season transfer window.

“I don’t think we are going to sign anyone, if we do it will be just one player,” he said. “The transfer market is very difficult unless you want to go to crazy numbers or look at the second level of players. The trouble with that is people then say they are not really Manchester United players and I agree.

“A few years ago this club went to Tottenham and bought Michael Carrick. Then it did the same with Dimitar Berbatov. You think that might have come about because in terms of history, achievement and finance, United are a bigger club than Spurs. Are they still? Yes. Can I go to Tottenham and buy their best players? No. They will not sell me Harry Kane, Dele Alli, Christian Eriksen or Son Heung-min. In the past the smaller clubs would practically beg big clubs to buy their best players. Now they are powerful enough to hang on to them.”