José Mourinho has ‘no intention’ of leaving Manchester United

Portugese rubbishes ‘garbage’ reports he could walk before honouring contract 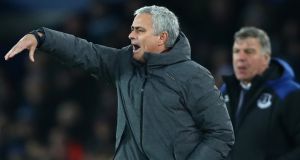 José Mourinho has insisted he has no intention of leaving Manchester United at the end of the season. Photograph: Clive Brunskill/Getty

José Mourinho has responded to speculation that he is unhappy at Manchester United, insisting he will be at the club next season and hopes to extend his stay beyond three years.

Launching something of a charm offensive in comparison with his sour demeanour at recent press conferences, the United manager described reports of a rift between him and the board as “garbage news”, adding that the owners and the board were happy with his work.

“I can’t find a better word than garbage to define the [recent]talk,” Mourinho said in the buildup to Friday’s FA Cup game at home to Derby. “If you want to ask me directly, I see myself next season at Manchester United. I will leave when the club wants me to leave; at the moment I have no intention to leave at all. I want to stay, I don’t see any reason not to stay.

“I still have a contract – in fact I am only in the middle of my contract, not in the last couple of months. My desire is to stay until the board and the owners are happy with my work. The worst thing about the garbage news is that it puts doubt on my professionalism, and that affects me because it is something I don’t admit. I hope by the end of my contract the board are happy enough with my contribution to want me to stay. Whether I get a new contract or not depends on the club but my commitment is total and I want to stay.”

Mourinho went on to dispute the theory that his body language of late has suggested someone disenchanted with his job, even taking a swipe at one or two fellow managers in the process. “Just because I don’t behave like a clown on the touchline it doesn’t mean I have lost my passion.,” he said. “I prefer to behave as I am, more mature; it’s better for myself and the team. You don’t have to behave like a crazy guy to be a good manager – it’s not all about what you do in front of the cameras.”

Perhaps aware of the need to lighten the mood following public gripes over Paul Scholes’ punditry and the club’s spending, Mourinho offered a jokey response to the suggestion that he could show a greater commitment to Manchester by moving to the area. “If the fans want me to be comfortable, that’s the way I feel comfortable,” he said. “I am very lazy, I like to arrive in the hotel . I don’t want anyone to worry about me, because I am not living in a two-square-metres room. I have an apartment within the hotel where I have all the comfort and support I need. If I was in a house that I didn’t like, lonely and away from my assistants, then I would be a sad guy – and sad guys don’t work well.”

Mourinho insisted he is emotionally connected with United in the same way he has been at all his previous clubs – “everyone knows in Italy I am Inter, in Spain I am Real Madrid” – though admitted he may struggle at his present club to top his achievements with Chelsea.

“The difference between Chelsea and United is that I really belong to Chelsea history,” he said. “I won three titles there, their first Premier League, cups, lots of things. At United we won the only trophy the club had never won, though I know the Europa League is not the Eldorado of football. It might be that I have come here in a moment when it is more difficult to make history. The Premier League now is completely different from 10 or 20 years ago. There used to be two big forces or perhaps a maximum three, but now you have clubs not fighting for the title or even the top four and their spending is amazing, even higher than ours. Everything changes, the nature of the job changes too, but my dedication to my work remains total.”

Mourinho confirmed he would name a strong team to face Derby, because he regards them as a Premier League-standard side. “I’m going to play Sergio Romero because he’s a top keeper and he deserves to play – he will be Argentina’s goalkeeper in the summer [at the World Cup] and David de Gea needs a rest. But otherwise I will go with a strong team with first-team players.” Romelu Lukaku will be back after missing the game at Everton as a precaution after being concussed, and Marouane Fellaini is also available should Mourinho wish to make changes in midfield.

Sportsman to statesman, Marcus Rashford is a ray of light in the darkness 12:29
Patrick Cantlay takes Zozo Championship after late ambush 11:10
John Cooney called into Ireland squad for France clash 10:58
All in the Game: Klopp’s Amsterdam subs don’t go down well 10:00
The Offload: Outgoing Tom Grace will be missed by IRFU 10:00