José Mourinho has full backing of Man United board 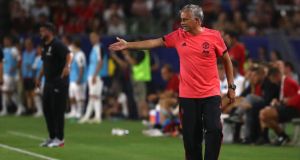 Jose Mourinho has been assured that finances are available for signings at Manchester United before the Premier League season starts. Photo: Victor Decolongon/Getty Images

José Mourinho retains the full backing of Manchester United’s board, with the hierarchy understanding the manager’s frustrations regarding signings and the number of players missing from the US tour.

The manager has been told there are still finances to strengthen his squad, with there being no need for Mourinho to sell before making any purchase. The 55-year-old is targeting a wide forward and a centre-back, with Internazionale’s Ivan Perisic and Leicester City’s Harry Maguire among his targets.

Following Saturday’s 4-1 International Champions Cup defeat to Liverpool in Ann Arbor, Mourinho voiced uncertainty over whether he would be able add to Fred, Diogo Dalot and Lee Grant as new summer acquisitions.

Mourinho also embarked upon United’s five-game trip to the States without 13 players due to post-World Cup breaks and stated they could be “in trouble” at the start of the season due to this and a number of injuries.

Mourinho has been particularly hampered by France, England and Belgium all reaching the final weekend of the World Cup as this ruled out seven frontline squad members from travelling to the US: Paul Pogba, Romelu Lukaku, Marouane Fellaini, Marcus Rashford, Ashley Young, Phil Jonesand Jesse Lingard.

United’s hierarchy are sympathetic to the manager’s unease and there remains optimism that Mourinho could still make a fourth signing, at least. The transfer window closes on August 9th and United’s Premier League curtain-raiser with Leicester at Old Trafford is the following evening. – Guardian service