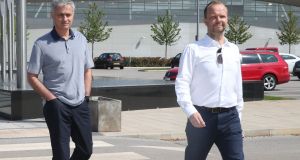 José Mourinho was spinning the truth from day one at Manchester United but Ed Woodward’s regime looks to be the one failing. Photo: John Peters/Man Utd via Getty Images

If you ever needed to know what a mess Manchester United have made of replacing Alex Ferguson, perhaps we can start with the tragicomedy that there are still 194 days before the six-year contract handed to David Moyes was supposed to lapse. Moyes lasted nine months and, in the process, seemed to age 10 years.

Louis van Gaal gave Old Trafford two seasons of drift. And now José Mourinho is history, too – with his lip curled, his bank account swelled by a reputed £15m in severance pay and a very public decline in which he demonstrated that the higher a man climbs the more you see of his backside.

It certainly has not been easy to associate the man Ed Woodward, United’s executive vice-chairman, called into his office just after 9am on Tuesday with the serial trophy machine who was known, in happier times, as the Special One. Remember that guy? The man who talked about God as if they were old friends. “He must think I’m a great guy,” Mourinho once said. “He must think that, because otherwise he would not have given me so much … he must have a very high opinion of me.”

Not many people could pull off that kind of amour propre. José did, though. Back then, anyway. Past tense.

Maybe, to give him the benefit of the doubt, he would have been the best man to replace Ferguson in 2013 rather than being left with a restoration job in 2016. United are a big, scary club that needed a big, scary manager. But something seemed to change during Mourinho’s years at Real Madrid, where the conflict with players and journalists could feel unending. The twinkle in Mourinho’s eye was missing during his second spell at Chelsea. For United, he stared back from hard, suspicious eyes. There are plenty of us who miss the old Mourinho, who liked that guy, who thought it might work for him at Old Trafford and find it a bit depressing that a man who has had so much success could seem so sour and unfulfilled. Where did all that precious magic go?

Not that he is entirely to blame and we can all probably imagine who Brian McClair was meaning when the former United player and coach wrote on Twitter that Mourinho was “not the only one who should depart”, adding three exclamation marks for effect.

What, after all, do Mourinho, Van Gaal and Moyes have in common from their spells at Old Trafford? None has a good word to say about Woodward.

Ferguson rarely sits beside Woodward and the Class of 92, who make it their business to know the inside track at Old Trafford, can be hugely dismissive, almost contemptuous, of the Glazer family’s first point of contact. Woodward should consider himself fortunate United’s owners make other matters a priority – the club’s financial results, to be specific – because if he was judged purely on the football operation then, yes, he would be lucky to keep his job. A recent cover of Red News fanzine summed it up neatly, with his face superimposed on a leaky bucket and the words: “If it is broke – do try and fix it, eh?’

Ultimately, though, Mourinho still has barely the shadow of a leg to stand on. How can he when his team are 19 points behind Liverpool at the top of the table, with a worse defensive record than Crystal Palace and Huddersfield, the same goal difference as Leicester and no more wins than Watford, Bournemouth or West Ham? United, in their present guise, have lost their aura, the great allure of Old Trafford, and replaced it with something entirely different: a churn of joyless games, with no clear plan and a group of demotivated players, some of whom fail to see what it should mean to pull on that famous shirt.

United have not had a fewer points total at this stage of a season since the year of Spike Island and the Strangeways riots. Of course Mourinho has been sacked. At any other elite club, he would have been sent to the guillotine long before now.

If there are mitigating circumstances, it is that Woodward gave him a contract extension at the start of the year, then undermined him in the transfer market and, again, when it came to the two players the manager had come to resent. Ferguson once said the minute a player started to challenge the manager’s authority, that was the time to tell that player goodbye. Not under this regime, though.

When Mourinho’s relationship with Paul Pogba and Anthony Martial broke down, it was Woodward who decided they were long-term assets who could outlast the manager and, as such, should be kept on.

All of which brings us to Pogba’s “caption this” Instagram post, looking very pleased with himself, soon after the news of Mourinho’s sacking broke. Adidas say it was an unfortunate coincidence but its client may have to understand that not everyone will listen. Player-power has infiltrated and polluted Old Trafford, in its worst forms, ever since Ferguson left and, for the third time, been a significant part in a manager losing his job.

Mourinho could also argue that United might not be in this fix – more goals conceded already this season than the entire last campaign – if the club had brought in one of the central defenders he had targeted during the summer. Yet Mourinho, being Mourinho, he overlooked the fact he wanted to replace Victor Lindelöf and Eric Bailly, two of his own signings, or that a £52m midfielder, Fred, was not even getting in his squad. Mourinho never wanted to talk about the vast amounts of money he had spent. He just talked about the vast amounts he wanted to spend on top.

And, frankly, it became tiresome. Mourinho complained recently that every other team had improved last summer – even Tottenham, he said, despite the fact they did not sign a single player. It did not even begin to make sense.

But that has been Mourinho’s way ever since he pulled out a handwritten list at his first press conference to nail “the lie” that he did not promote academy players. The 55 players he identified included Arjen Robben, who had made more than 100 appearances for Groningen and PSV Eindhoven, won 10 caps for the Netherlands and played in Euro 2004 before he joined Mourinho’s Chelsea. Several others had made their debuts elsewhere. One, amusingly, had never played for Mourinho whatsoever, 10 had played fewer than 10 minutes and three had managed a minute each. That was Mourinho’s first day in office and already he was spinning the truth, drowning the club in his make-believe.

Perhaps it is clearer now why Ferran Soriano, the Manchester City chief executive, formerly of Barcelona, once wrote that the Catalans rejected the idea of Mourinho being their manager because he “generates media conflict almost permanently”. Maybe you remember Mourinho’s team going out on penalties to Derby in the Carabao Cup and him referring to it ever since as a draw. Or the time he complained Manchester City had a “friendly” game against Southampton before the last Manchester derby, then found his own team 2-0 down after 20 minutes of their visit to St Mary’s stadium (eventually drawing 2-2). There are countless other examples.

It came to a head at Anfield on Sunday when the lingering memory was the Marouane Fellaini shot that felled a steward by the corner flag, the little shake of the head from Ferguson in the stands and the “don’t sack Mourinho” chants, loaded with irony, from Liverpool’s crowd.

Mourinho did win the League Cup in 2017 and the Europa League – a wooden treble, if you like, given he insists on counting the Community Shield – but nobody comes out well from his years in Manchester. Not him, not Woodward and not the players who, in the coming days and weeks, will presumably tell us they were all behind the man who – if you know the chant – just wasn’t special any more. – Guardian service