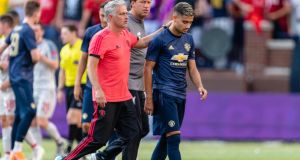 José Mourinho has aired his frustration at Manchester United’s summer transfer process as he revealed he expects only one more signing before the deadline, and Nemanja Matic will miss the start of the season with injury.

The United manager claimed he submitted a list of five transfer targets to his club in March, specifically executive vice-chairman Ed Woodward, but is still waiting for all to be signed with 12 days remaining in the window. Central defenders Harry Maguire and Yerry Mina have both been linked with moves to Old Trafford but Mourinho does not hold out hope of two additions before August 9th.

Mourinho believes United will be “in trouble” at the start of the Premier League season given the amount of World Cup absentees and injuries during pre-season. The weakness of his current squad was exposed by Liverpool on Saturday when Jurgen Klopp’s team dominated their International Champions Cup fixture and won 4-1 in Ann Arbor.

“This is nothing to do with reinforcements,” he said of the heavy defeat. “The reinforcements are Pogba, Fellaini, Lindelof, Rashford, Lingard, Matic, Valencia. These are reinforcements. This is not our team. We started the game with almost half of the players who are not even going to belong to our squad on August 9th. They will not be here.

“This is not our squad. Reinforcements, you mean players that I would like to buy, that’s another thing, but this is not my squad. This is not even half my squad, or 30 per cent of it. So don’t look to this.

“Today we have four or five players who are dead because they care with the club and try to give everything, even risking themselves, because they don’t want to let all the kids play by themselves against Milan, against Liverpool. As an example, Eric Bailly was not going to play and when he saw that Smalling was injured in the warm up, he decided by himself that he didn’t want another kid on the pitch. It was not fair on Alexis and Mata and Herrera.

“We are just trying to play these matches the best we can, and I think the boys did very well until the gasoline went. When it went, it was goodbye. Liverpool had the majority of their players, and they rotated their players. Salah played 45, then 45. We can’t do it. Herrera 90 minutes, [Andreas]Pereira 90 minutes ... gasoline over. So what did this game give me? Nothing at all.”

Mourinho revealed afterwards that Matic had undergone surgery on an unspecified injury suffered at the World Cup and will miss the start of the new campaign: “Matic is out for the start of the season. He came from the World Cup with an injury, and the time he had to rest was not enough to resolve the problem. He went to Philadelphia to a specialist and he had surgery immediately to try not to lose more time.”

The United manager was also critical of Anthony Martial, who left the US tour to attend the birth of his second child on Thursday but has yet to return. “He has the baby and after the baby is born – beautiful baby, full of health, thank God. He should be here and he is not here. Now we have Real Madrid and after that we have Bayern Munich and that is our start.

“I just hope the boys on deserved holidays take care of themselves a little bit and somebody wants to do what Rashford and [Phil]Jones do, which is to be back a little bit earlier to try and help the team because for the beginning of the season we are going to be in trouble.”