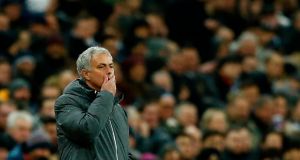 José Mourinho has conceded the title to Manchester City for the first time. Photograph: Ian Kington/AFP

José Mourinho has conceded the title to Manchester City for the first time, the manager stating Manchester United must now strive to be the “first of the last” this season.

United are in second place, 15 points behind City with 13 matches left. Mourinho wants his side to finish there, so is intent they beat Huddersfield Town at Old Trafford on Saturday.

He said: “The game is important because we need points to be the first of the last. We have to try to finish second. We are in this position all season; we were first for a few weeks and then we were always second.

“We are better than last season in every aspect – points, position, number of goals scored, conceded – so we have to try to stay there.”

Asked how he felt to accept the championship race is over in early February, Mourinho said: “It makes me feel that they [CITY]are doing so well that they are not letting the others come close. The fight is open for second, third, fourth, fifth, and sixth, but is practically closed for the first.”

United are five points ahead of Tottenham, who are fifth. “I cannot say we, Tottenham or Chelsea [THIRD]is doing bad because the points we have is very reasonable. But Manchester City started strong and kept doing strong and managed to win matches they didn’t deserve – I give credit – with that push of the last-minute goal, the winning goal in [ADDED]time.

“If you tell me all six [TOP TEAMS]want to be champion and only one will be and the other five fail, I think is too pragmatic [CLINICAL]a way to look at it because you can do positive work and not win the title.”

“Bailly and Ibrahimovic are working on the pitch but not yet with us as a group so they are not very close to a return. I want to believe that by Champions League time, around the end of the month, they will be back.” United are at Sevilla on February 21st.