José Mourinho faces another defining moment at his old haunt 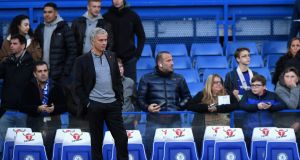 José Mourinho has faced many a date with destiny at Stamford Bridge and Manchester United’s latest visit could be another one. Photo: Shaun Botterill/Getty Images

One reason put forward to explain why the great plague did not just keep on ravaging the human race forever is that it ran out of people to kill. The vulnerable succumbed. Those who were resistant grew stronger. Meanwhile the plague remained the same, stuck in its old plague ways, scowling on the periphery, reduced to the odd destructive burst.

There are of course many points of difference between José Mourinho’s approach to winning at football and the bubonic plague. But like the great plague Mourinho’s voracious early success has been followed by a period of dying back; like the plague Mourinho is still basically doing the same thing; and like the plague the high Mourinho style seems, at times, to have simply run out of people to kill.

Saturday’s lunchtime kick-off against Chelsea already looks like the start of a run of games that will define Mourinho’s fretful third season at Manchester United. That is no surprise. It is Mourinho’s destiny to find his life measured out in trips to Stamford Bridge, those clanky blue stands the framing against which his managerial evolution has been marked: from the golden years of Bubonic José, the slick young coach with the physically dominant attacking style to the strangulating triumphs and angry departures a decade later.

And so to this weekend, when Mourinho will return to face a manager who is similar in one way and utterly different in so many others. In August Mourinho revealed he had never met Maurizio Sarri, let alone fielded a team against him. Sarri is four years older, with 12 years less on the clock as a top-tier coach. He is, from one angle, a kind of Bizarro José, another Chelsea manager who never played professionally, the banker versus the translator.

At which point the similarities run dry. Mourinho served a privileged apprenticeship at Barcelona. Sarri grafted part-time in amateur football. Mourinho is obsessed with presentation and show. Sarri wanders around the Stamford Bridge touchline wearing dad-glasses and an ill-fitting nylon smock-shirt that makes him look like an overworked military field surgeon on a fag break between yanking out shrapnel and swapping wisecracks.

Tactically Mourinho’s first instinct is to constrict, to disrupt his opponents’ strengths before asserting his own whereas Sarri still comes across like a fan with a tactics board, a man drawn to the flame, bent above all on enacting his own vision of high-energy attacking football.

Events have transformed this first meeting into an occasion of unusual October urgency, on one side at least. It is a fixture Mourinho really could do with winning, and for reasons that go beyond the usual bruised and resentful one-upmanship towards his successors in the Stamford Bridge dugout.

Reports have suggested Mourinho spent the international break working furiously on preparations for United’s next run of fixtures. On Tuesday morning he could be seen arriving at Carrington before the sun had risen, eyes gleaming with manic intent through the gloom of his club saloon.

And before a ball is kicked the most obvious conclusion is that Sarri’s style looks, at first glance, to be made for Mourinho. The pattern has been clear. Central midfield controls the ball: nobody comes close to Jorginho’s 853 Premier League passes this season, most of them urgent little sideways shuttles. In between “resting the ball” Chelsea’s attacks come in swift, short-passing waves with the whole team shifting upfield. David Luiz is vital to this, never happier than when encouraged to gambol about the pitch with his head in the air, ears flapping, like a prize terrier with a surgical cone on its neck haring the wrong way round the Crufts ring. Ahead of him the forwards are expected to apply a high press, to defend by going forward rather than back.

“Sarrismo” has been a hit in west London. Only Manchester City have kept the ball more or had more shots. And yet at first glance it is ideally suited to that old José plague-ball of deep defence and isolated, effective attacks.

This has always been Mourinho’s system against strong opponents, from that famous Champions League semi-final victory against Guardiola-era Barcelona in 2010 when his Internazionale team simply kicked the ball away and sprinted into their defensive phalanx; to the best moments of the current era at Old Trafford.

There was a snort of derision when Mourinho suggested last season’s second place in the Premier League was up there with his best achievements. But in among the bluster there is a hint of what really motivates him. The best spell last season, the part Mourinho will cherish, came over eight weeks in February and April when United beat Liverpool, Chelsea, Manchester City and Tottenham. Each time United fielded two holding midfielders plus either Paul Pogba or Juan Mata in front. Each time victory came while taking significantly less possession than their opponents.

For a while this felt like the old methods clunking back into gear – but not for long. The world has shifted on. The Premier League is flush with adaptable high-level coaches, with enough data and post-match analysis to formulate their own countermeasures.

Since April United have faced top-six opposition twice more. In the FA Cup final Chelsea gave them 67 per cent of possession and picked off José’s anti-cavaliers on the break. When Spurs came to Old Trafford in August they also invited United to play, then had the speed and precision to score three times once the defensive block had slackened.

This is a pattern. United lost at Brighton in August with 67 per cent of the ball. They had the bulk of possession in the defeat at West Ham. When Newcastle United went 2-0 up at Old Trafford two weeks ago there was startled talk in the TV studios about a “lack of fear”. But this is the antivirus: give them the ball, let them play. Even teams in the bottom half are wise to United’s sacrifice of craft and invention in favour of discipline and physical strength.

This is just one reason why Saturday at the Bridge looks particularly well-poised. Over the summer Sarri talked about his excitement at facing Mourinho for the first time. In response Mourinho talked about how lucky Sarri was to have such “good conditions to work” –that is, conditions he, Mourinho, had helped to create.

These include the presence of Eden Hazard, who could make the difference again and whose early progress under Sarri has been used as a stick with which to beat his former manager, another measure of Mourinho’s antiquated caution.

There will be no Ander Herrera to man-mark Hazard. No doubt Mourinho’s prep sessions will unearth some alternative measure, just as Sarri, another obsessive, has had 10 days to prepare his counterplay. And something could shift come Saturday afternoon. Chelsea are unbeaten in the league. Should United end that record they will be only four points off top spot for the next few hours, surprisingly so given the general air of theatrical crisis. Most intriguing will be how they go about it, how exactly Mourinho chooses to confront a team whose style seems designed to appeal to the Black Death in his nature. – Guardian service