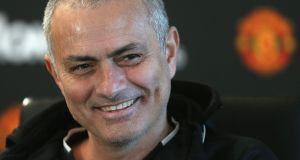 José Mourinho has given Anthony Martial a stark warning that his performances at Manchester United must improve because it would “kill the others” if he was chosen ahead of them on current form.

Martial was not even among United’s substitutes in their 1-1 draw at Stoke City on Saturday and Mourinho admitted being dissatisfied with the player’s form since challenging him in November to re-establish himself as a mandatory first-team pick.

On that occasion Mourinho had left him out of the squad for a Europa League tie against Feyenoord and, two months on, the manager’s verdict is that the player has not warranted a regular run on the left side of United’s attack.

“I don’t think he lost his focus,” said Mourinho, preparing for the second leg of United’s League Cup semi-final against Hull City. “I just think he didn’t catch with both hands a big opportunity he had. When we spoke about Memphis Depay [leaving United] we spoke about it being the only position where we have an over-booking of players.

“We have still five players for this position. I cannot give one player chances to play and kill the others. I think I already did that with Memphis by considering him the last option and by not giving him any option. But with the other guys I think you would be asking me why [Juan] Mata is not playing or why Marcus Rashford doesn’t have a chance, or why Jesse Lingard, a national team player, is not playing.

“We have Rashford, Lingard, Mata, [Henrikh] Mkhitaryan and Martial, and I cannot give the same player chance after chance and not consider the effort of the others.

Martial, signed for an initial £36 million from Monaco in September 2015, scored 17 times in 45 appearances last season but he has managed only six goals in 20 competitive games since Mourinho took over. He flew to France at the weekend while his team-mates were playing the game in which Wayne Rooney went past Bobby Charlton’s scoring record for the club.

Mourinho, however, made it clear he did not have any issue with his player spending the weekend in Paris. He said: “We don’t have many days off. If, for him, it was better to go to Paris, that’s completely fine.

“For the weekend [the FA Cup fourth-round tie] against Wigan, if nothing has happened in terms of injury, I’m going to play Sergio Romero in goal and put Joel [Pereira] on the bench. David de Gea will be free and if he wants to go to Spain and enjoy two days, he has to go. I give the players this freedom of choice – so there’s no problem at all with Anthony going to Paris.”

Mourinho is preparing for a run of three games in six days. He was no doubt referring to his former club Chelsea when he spoke of teams with “a wonderful life” with only one match a week.

His team have a more congested fixture schedule, not least because of their involvement in what Mourinho described as “the non-stop competition”, namely the Europa League. But it helps they have no new injuries for the trip to Hull where his side will have a 2-0 lead .

Eric Bailly is returning from the Africa Cup of Nations after Ivory Coast’s surprising early exit – though not in time to play at Hull – and Mourinho believes Luke Shaw, having not started a game since November 30th, is ready to press for a first-team place again.

Mourinho, with his long history of disciplinary issues with the Football Association, was asked about the possible punishment facing Arsène Wenger for his treatment of the fourth official, Anthony Taylor, during Arsenal’s game against Burnley on Sunday. There was, Mourinho said, no comparison. “I never pushed the referee,” he explained.