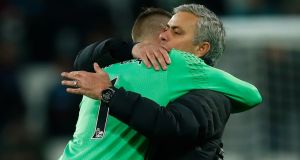 Wayne Rooney will start for Manchester United in Saturday’s FA Cup third round meeting with Reading at Old Trafford as the holders attempt to win the trophy for a record 13th time.

The captain has missed the last three matches with a muscle problem, his last action coming in the 2-0 win at West Bromwich Albion on 17 December. He has scored 248 goals for the club, one fewer than Bobby Charlton’s United record.

While José Mourinho confirmed Rooney and Sergio Romero will be in the XI to face Jaap Stam’s team, United’s manager made clear Morgan Schneiderlin and Memphis Depay are not under consideration to play as long as their respective futures remain unresolved.

Everton are interested in both Schneiderlin and Depay – with the latter player also interesting Fenerbahce. Mourinho said: “Their situation is exactly the same, both of them I will allow to leave – if the right offer comes. Until this moment, no. Is this a good situation? No. Why not? Because I don’t think about them as options in this moment. In normal conditions they would probably be selected for the match tomorrow and they aren’t because we are waiting for something that a couple of weeks ago looked like 100% and at the moment looks like 0% because we don’t have any offer that is close to the quality for the players we have.”

Bastian Schweinsteiger trained away from the squad at the start of the term but is now back in the first-team group and his situation differs from that of the Frenchman and Dutchman. “He’s selected again so he can start, he can be on the bench [versus Reading],” the Portuguese said. “He’s an option for us, that’s the best way to describe it. For many months he wasn’t an option, when we brought him back in the first couple of weeks he was not an option, not ready to compete. But since then working very well, never an injury, he was ill last week. His body is fine, is training very well, he’s ready to play.

“Again in my approach, because I think it’s the right one from the human point of view, if a player is not playing I cannot stop a player to leave if the offer is right. He wants to stay, he is staying, he is an option because he’s an option he’s selected for tomorrow.”

“That’s why I hugged David at the end of the West Ham game because no save, Antonio goal, no three points. But season after season the goalkeeper is player of the season, it means that something is wrong. Hopefully he’s not player of the season this season but hopefully he keeps making important saves for us like he did in last week.”