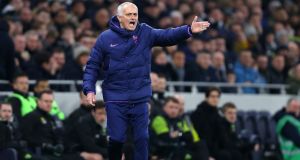 Jose Mourinho has admitted it was wrong to host a one-on-one training session with Tanguy Ndombele in a public park during lockdown. Photograph: Julian Finney/Getty

Jose Mourinho has accepted that he was wrong to oversee a makeshift training session with Tanguy Ndombele in north London on Tuesday. The Tottenham manager was pictured on Hadley Common with Ndombele – in breach of British government regulations that permit people to exercise outdoors during the coronavirus pandemic only with members of their household.

Elsewhere on the common two other Spurs players – Davinson Sanchez and Ryan Sessegnon – were pictured running together, failing to respect the two-metre physical distancing requirement.

An eye witness has told the Guardian that he saw Ndombele, Sanchez and Sessegnon walking off after they had finished their workouts and they were 20 metres apart. The players live locally. The witness also said that he saw Juan Foyth “on his own about a mile down the road” and Serge Aurier “about a mile after that”. There is no indication Foyth and Aurier breached the guidelines.

Spurs were moved to remind their players to respect social distancing when exercising outdoors and Mourinho issued a statement on Wednesday.

“I accept that my actions were not in line with government protocol and we must only have contact with members of our own household,” Mourinho said. “It is vital we all play our part and follow government advice in order to support our heroes in the NHS and save lives.”

Mourinho is understood to be adamant that he adhered to social distancing when with Ndombele and two other unidentified men on the common, even if that rather missed the point about his being there with them in the first place.

Mourinho has publicly criticised Ndombele since he took the Spurs manager’s job last November, struggling to hide his frustration at the club record signing’s poor fitness and erratic performances. But everybody at Spurs has seen Ndombele’s quality in training and it has been noted that Mourinho would have taken such a strong line with him only because he cares about drawing the best from him. – Guardian