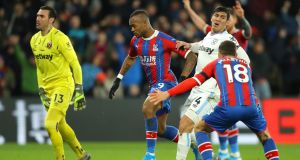 The odds of West Ham being dragged into a relegation battle may have seemed slim at the start of the season but, after a wonderful piece of individual skill from Jordan Ayew, which helped Crystal Palace do the double over their London rivals, suddenly that is a very real prospect.

Having taken the lead through Robert Snodgrass against the run of play at the start of the second half, Manuel Pellegrini may have felt his luck was turning. But an equaliser from Cheikhou Kouyaté and, for the second time this season against these opponents, Ayew’s brilliant winner that was reminiscent of his father, the former Marseille and Ghana playmaker, Abedi Pele, leaves West Ham one point and one place clear of trouble before Leicester’s visit to the London Stadium on Saturday.

While the victory over Southampton in their last outing on December 14th had eased some of the pressure on Pellegrini, he knew a second defeat of the season to Palace could easily set the alarm bells ringing again. So the news that first-choice goalkeeper Lukasz Fabianski had failed to recover from the hip injury that has kept him out for three months was not the best start to the manager’s day.

Pellegrini had acknowledged the former Atlético Madrid and Real Zaragoza goalkeeper Roberto “didn’t have good performances” earlier in the season, with West Ham having conceded 19 goals in his previous nine appearances this season.

Yet with understudy David Martin also out, Roberto was given the nod over the teenager Joseph Anang, while Pablo Zabaleta was also returning for only his third league start of the season.

On a day that even he would surely have fancied his chances of scoring, Palace were without Christian Benteke after the striker suffered a muscle injury that Roy Hodgson admitted may keep him out of action for some time. It meant a rare start for Max Meyer in a more advanced role on the right and, after a disappointing first 18 months in the Premier League since his free transfer from Schalke, the diminutive German looked determined to make an impression.

After volleying Roberto’s weak punch clear from a corner way over the bar in the sixth minute, it was Meyer’s cross that Ayew failed to direct on target on the half-hour mark after brilliant work from Wilfried Zaha down the left flank.

Lacking Benteke’s physical presence to lead the line, Palace struggled to test Roberto enough and could have easily found themselves a goal down at half-time had Snodgrass not dithered over his shot with the goal gaping following an uncharacteristic blunder by the other Spanish goalkeeper on display, Vicente Guaita.

Pellegrini and Hodgson shared a joke as they left the pitch at the break, although the West Ham manager will not have been amused by the heated exchange between teammates Mark Noble and Angelo Ogbonna after Ayew went close just after the resumption. Aaron Cresswell lost possession and it required a strong save from Roberto to deny the Ghana forward, with Noble making his dissatisfaction known to Ogbonna as they prepared to defend the corner.

There is nothing like a goal to bring a team together and Snodgrass’s excellent finish after a powerful run from Michail Antonio was certainly timely for the visitors. A suspected hamstring injury to Patrick van Aanholt was a second major blow to Palace as the defender limped off the pitch to be replaced by Jairo Riedewald, although they were level soon after.

An excellent cross from James McArthur was headed into Kouyaté’s path by Ayew and the midfielder made no mistake from close range.

Both sides had their chances to snatch victory in the closing stages, with Roberto’s save to deny Connor Wickham when the striker was clean through on goal looking like it had earned a point for West Ham until Ayew’s late heroics.

Shane Lowry well aware of the perils of on-course microphones 15:17
Johann van Graan expecting a Leinster side that means business on Saturday 15:08
Lowry and Harrington avoid the elephant in the room 15:04
India coach Ravi Shastri hails ‘one of the greatest series ever’ 14:45
Ireland midfielder Conor Hourihane set for Swansea loan spell 14:25

2 Lowry and Harrington avoid the elephant in the room