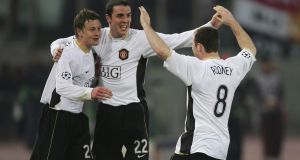 John O’Shea celebrates with Ole Gunnar Solskjær and Wayne Rooney after scoring the equalising goal against Roma at the Stadio Olimpico during the Champions League quarter-final in April 2007. Photograph: Alex Livesey/Getty Images

John O’Shea believes that Ole Gunnar Solskjær has already demonstrated he can do the Manchester United job on a permanent basis.

Solskjær was the senior figure in United’s starting XI on the day in October 1999 when former Ireland international O’Shea made his professional debut – and they remained regular team-mates until the former’s retirement in 2007.

Wednesday’s 2-0 victory at Newcastle means he has overseen four victories from four to equal a record set by club great Matt Busby, and O’Shea is already convinced he can succeed long-term.

On Saturday in the FA Cup at Old Trafford, Reading’s O’Shea will be attempting to undermine that “amazing start”, but he is relishing his former club’s success under a manager who wants to remain in the job.

“To bring that freedom of expression and enjoyment; they’re at Manchester United because they’re good players. That’s the big thing.

“Knowing Ole, the type of player and person he was, you can see why the board and the club decided to go that way.

“It’ll be that enjoyment factor, and that professionalism and killer instinct he had. That’ll have been the key. The enjoyment and maintaining the standard of what the club and fans hope and expect to see.

“They’ve had a run of games where they’ve really put their foot down and go on and finished teams off as well. Everything he seems to be doing at the minute – he makes a sub and 40 seconds later the sub scores.

“Everything’s going in his favour at the minute, but I hope he stays unbeaten in the league and gets knocked out of the cup.

“If he keeps that run going, if he has success in – hopefully not the FA Cup – but the Champions League, and carries on the run in the league, he’ll be putting himself as a frontrunner for the job.

“He’ll want to carry on that momentum he’s created early on, and he’ll definitely be under consideration.

“He’s been brought in until the summer but that can all change very quickly.”

In contrast to United, it was shortly before Christmas that Reading appointed a Portuguese manager in Jose Gomes in their attempts to climb out of the Championship’s bottom three.

The 48-year-old has known Jose Mourinho, sacked by United just days before his arrival, for 20 years – and is also convinced United possess such quality that they can excel regardless of their manager.

“I don’t want to disrespect any manager; even if no manager is sitting on the bench, they are able to beat any team in the world,” Gomes said.

“They are playing a different way and it looks like the players are comfortable with that.

“They have very high individual quality. It doesn’t matter who the manager is working with them during the week; they can still win matches.

“I respect [Mourinho] and he was very important for Portuguese coaches for everything that he achieved.

“I would like to play against his team with him as the manager, but this is football and they have made the change, and they are doing very well.”