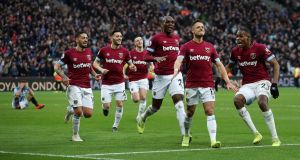 Javier Hernández scored twice as West Ham came back from the brink of a humiliating defeat to beat Huddersfield 4-3 at the London Stadium.

Town, rock-bottom of the Premier League and all but doomed to relegation, were heading towards only their fourth win of the season when they led 3-1 through Juninho Bacuna and a double from Karlon Grant.

But Hernández climbed off the bench to score twice and shove Huddersfield another step closer to the Championship.

The visitors had only scored eight away goals all season before they showed up at the London Stadium.

By half-time that tally had reached double figures and just after an hour they made it 11 with mid-table West Ham looking every bit a set of players who have already clocked off for the summer, in the middle of March.

But the Hammers, who led through Mark Noble’s early penalty, eventually woke up and Angelo Ogbonna pulled one back.

Wes Morgan scored a 90th-minute winner for 10-man Leicester as they overcame the fourth-minute dismissal of Harry Maguire to claim an unlikely victory over Burnley at a wet and windy Turf Moor.

The England defender was shown a straight red card for bringing down Johann Berg Gudmundsson but Burnley were unable to make their numerical advantage count and the 2-1 defeat was their fourth in a row.

Leicester took the lead in the 33rd minute through a fine free-kick from James Maddison but 19-year-old Dwight McNeil equalised with his second Premier League goal five minutes later.

Burnley pushed for what would have been a potentially crucial win in their battle against relegation but instead it was Morgan who found the breakthrough, heading in Youri Tielemans’s deflected cross.

The Scotland international, who left the Vitality Stadium to join the Magpies in 2016, lashed home on the half-volley four minutes into added time.

Joshua King’s second-half brace looked to have earned the Cherries a comeback victory after Salomon Rondon put the visitors ahead with a first-half free-kick.

The result edges both clubs closer to Premier League survival, with Eddie Howe’s hosts now 10 points above the bottom three and Newcastle three points further behind.