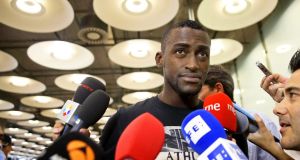 The Colombia striker Jackson Martínez has become the latest player to move to the Chinese Super League after Atlético Madrid confirmed he will move to Guangzhou Evergrande for a fee of €42m (£32m).

Martínez, 29, moved to Atlético last July for around €35m but has failed to settle at the Vicente Calderón, scoring two goals from 15 league appearances for Diego Simeone’s side.

Yet that has not stopped Guangzhou, who are managed by the former Chelsea manager Luiz Felipe Scolari, from shelling out a massive fee to add him to a squad that already contains the Brazil international Paulinho, once of Tottenham.

According to the Spanish newspaper AS, Martínez did not attend training on Monday, with his absence described as “for personal reasons with permission of the club”. His agent Jorge Mendes began negotiations with Atlético that evening but could not reach agreement, only for the club to eventually agree to sell Martínez late on Tuesday.

China’s transfer window remains open until 26 February and with Jiangsu Suning having already signed Ramires from Chelsea for £25m, there could be more deals to come.