Grealish, who has two years left on contract, is believed to be frustrated by club’s stance 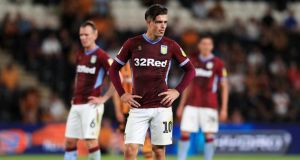 Aston Villa’s Jack Grealish looks set to stay at the club after an offer from Tottenham was rejected. Photo: Mike Egerton/PA Wire

Jack Grealish appears unlikely to be allowed to leave Aston Villa this month after the club’s new owners backed out of a deal to sell him to Tottenham, with Mauricio Pochettino’s side having agreed to pay £25m for the England Under-21 international.

Tottenham have been tracking Grealish all summer after his performances for Villa in the Championship last season but only firmed up their interest this week. It is understood that Spurs indicated they were willing to meet Villa’s valuation of the midfielder earlier this week but were denied the opportunity to discuss personal terms with the 22-year-old after new executive chairman Nassef Sawiris informed them he was no longer for sale.

Grealish, who has two years left on his contract, is believed to be frustrated by the club’s stance, having been assured that he would be allowed to leave in this transfer window if any suitable bids were received. He was given a standing ovation from Villa fans when he was substituted during the 3-1 win at Hull on Monday, with Bruce admitting he was hopeful of keeping a player who joined the club as a six-year-old.

“We understand the human side,” he said. “He will want to play in the Premier League, Europe, Champions League. “The owner has made it clear that he wants him to stay. To be fair to Jack, he has got on with it.”

Tottenham are now expected to move on to potential other targets having yet to add to their squad this summer, with Manchester United’s Anthony Martial among the names to have been considered over the past few months. Spurs are also willing to sell Toby Alderweireld this summer, with a clause in the Belgian defender’s contract stipulating that he can leave for just £25m next summer. Yet despite interest from United, they have yet to receive a firm bid for the 29-year-old, who made only 13 Premier League starts last season.

Villa, meanwhile, have been told that Robert Snodgrass will be staying at West Ham this season despite Bruce’s desire to bring the Scotland international back on loan after a successful stint last season. There is interest from other Championship clubs in Albert Adomah, who has just one year of his contract remaining, while left-back Joe Bryan is due to complete his move from Bristol City for around £5m.

West Ham are also expected to announce the signing of Lucas Pérez from Arsenal for £5m after the Spanish forward agreed personal terms earlier this week. – Guardian service