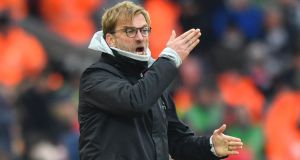 Jürgen Klopp has admitted he is not happy with Liverpool’s past few results in the Premier League and revealed he held a “long” meeting with his players the day after the 3-2 defeat by Swansea City.

Klopp also suggested the players were not enjoying themselves. “We had a very intense period around Christmas and new year,” the Liverpool manager said. “Fair enough, so did everybody else, but before the Swansea game I thought we were back on the right track. But what I spoke most about was enjoying what we do.

“We are Liverpool, a really good football-playing side, and we don’t enjoy the job we have to do. It is not as though we are a team at the bottom of the league that has to defend 80 per cent or 90 per cent of the time. In most of our games we are dominant, so we have to enjoy this.”

He also said their defensive record was discussed. “We scored two goals, enough to win, but I felt the defending could be improved. I also think the goals we have conceded in 2017 have been the same story.”

Liverpool have won just one of their six games since beating Manchester City on New Year’s Eve, and that was with the help of a replay against Plymouth Argyle of League Two in the FA Cup. They were defeated by their next opponents, Southampton, in the first-leg of the League Cup, though Klopp believes a one-goal deficit should not be too much to overcome in the return at Anfield on Wednesday.

“For us, 1-0 is no different to 0-0, there is still all to play for, everything is still possible. If it had been 3-0 to Southampton after the first-leg we would have had to think about a few things.”

Therein lies the rub, because most observers felt Liverpool were lucky to escape St Mary’s with a single-goal defeat.

He denies Liverpool’s slump in form has anything to do with the absence of Joël Matip – “we are a big club, it is not allowed to say you miss one player” – and feels his side needs to defend better as a team.

Liverpool could be through to a Wembley final, against Manchester United, by Wednesday night, and after reaching the final last year Klopp would like to go one better and win it.

“A semi-final is a big game for us. We have to concentrate on Southampton, then see who is available for Wolves at the weekend before we can turn our attention to Chelsea, ” he said.

Klopp is becoming used to fixture overload, though while it is clearly not ideal to have a showdown with the league leaders as a third game in six days, he reserved most of his scorn for the early kick-off in the FA Cup on Saturday.

“We want to take our EFL semi-final seriously, as well as the FA Cup, but it is clear not every-one feels the same. We have an important semi-final on Wednesday night so they have given us a 12.30pm kick-off on Saturday.”

Klopp confirmed Jordan Henderson is still feeling discomfort from a heel injury, though says it is not the same complaint that sidelined him last season. Henderson is expected to play against Southampton. Guardian service