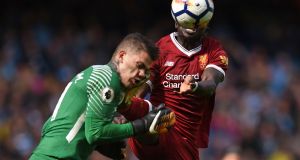 If you can meet a 5-0 thrashing and a messy 1-1 draw and treat those two impostors exactly the same; well, there is a fair chance you will be a testy, process-obsessed Catalan super-manager, my son.

Six months ago Pep Guardiola described Manchester City’s draw with Liverpool at the Etihad Stadium as “one of the best moments of my career”. Fast forward to Saturday lunchtime and City’s 5-0 shellacking of the same opponents on the same ground left Guardiola a little restless, a little cagey in his judgments.

City’s manager was pleased and talkative but still rueful over the opening half-hour when Liverpool perhaps shaded it and when, if you had had to bet on a player being sent off, it would surely have been Nicolás Otamendi, whose performance combined ponderousness with a blind scything violence whenever he got near the ball.

City led 1-0 in the period before Sadio Mané’s red card. The goal came via Kevin De Bruyne’s perfect fizzed through-pass, some baggy defending and a fine finish from Sergio Agüero. But Liverpool had already gouged City open three times down their left side as Mohamed Salah sprinted into space between Benjamin Mendy and Otamendi, both players struggling with defensive positioning in the 3-5-2 system.

And so the wider narrative of this game had been settled long before the final whistle was blown. Received wisdom will say Mané’s red card killed the game, placing an asterisk against all that followed. Liverpool’s best player was sent off for catching Ederson with a recklessly raised boot as he ran through on goal.

There are plenty who will defend an attacker’s right to challenge for the ball. Sadly for Mané these do not include football’s rule-makers, who deem dangerous contact involving a raised boot to be a strict liability offence. Mané was distraught as he left the field and has since apologised profusely for injuring his opponent in an “accidental” collision.

There are two things worth saying about the game’s central incident. Firstly, this was not some entirely random occurrence divorced from the skills and match-winning qualities of both teams. Ederson was exceptionally brave in coming for the ball. His fine goalkeeping was rewarded with a goalscoring chance snuffed out, a kick in the face and ultimately Mané’s sending off.

In that moment City’s player was more decisive and better at playing within the rules. In that moment the decision to replace Claudio Bravo with the more sprightly Ederson also found a reward – good managerial judgment from Guardiola, good play by Ederson, poor judgment from Mané. None of this sounds like a random event or bad luck, any more than poaching goals or winning tackles or making saves. The red card did not kill Liverpool’s game. Mané losing that duel to Ederson killed Liverpool’s game.

The second point worth making is that it was only a red card, not a mass contraction of the bubonic plague. Liverpool’s response was to collapse completely, conceding territory, possession and four more goals, two to Leroy Sané, who had only 22 touches but provided a bravura end note with a beautiful left-foot shot into the top corner as an exhausted midfield stood off him.

Red card or not, Jürgen Klopp did not have his best day. Liverpool are missing Nathaniel Clyne but exposing Trent Alexander-Arnold to an opponent and an occasion like this looked a vote of confidence too far.

In the event Liverpool’s right-back had a brutal, exhausting afternoon. No shame there: his opposite number Mendy comes in just behind Marcelo on the list of best attacking left-backs in the world. Either one of James Milner, for his experience, or Joe Gomez, for his more specialist defensive skills, would surely have been a better option.

At the end Klopp was also strangely vague. In his press conference he seemed to think Liverpool’s next game, against Sevilla, was on Tuesday, not Wednesday, and had to be corrected. He was unsure whether his team were behind or not when Mané went off.

Call them minor moments of forgetfulness but football managers, and indeed Klopp himself, tend to be razor sharp on these details – out of necessity, too. There are times you have to bristle and fib and “win” the aftermath of a 5-0 defeat. Alex Ferguson may have been a far less reasonable presence but he would have walked out bristling and full of motivating excuses. Klopp just looked drained by the day.

Similarly the best parts of City’s game may also go a little under the radar thanks to that red card. The defence did look vulnerable with Mané on the pitch. But playing against 10 men was perhaps a valuable exercise in itself, if only because for the first time this City team looked not just like a fine attacking unit but like a Pep-issue entity.

At their best his Barcelona and Bayern teams would make opponents look like this even with 11 men: depleted, exhausted, incidental obstacles to the pass-and-move game. If this felt like a training game it was still a valuable training game and a moment when some of those vital cogs began to turn, the passing rhythms to settle. – (Guardian service)