Jürgen Klopp says Liverpool got what they deserved in Swansea 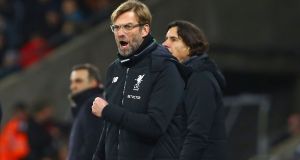 Liverpool manager Jürgen Klopp gestures on the touchline during the Premier League match against Swansea City at The Liberty Stadium. Photograph: Geoff Caddick/AFP

Jürgen Klopp lambasted his Liverpool side’s performance after a shock defeat against the Premier League’s bottom club, Swansea City, and insisted he did not suspect any complacency following their impressive 4-3 win over leaders Manchester City.

Alfie Mawson’s first-half strike was ultimately enough to earn Carlos Carvalhal’s side a 1-0 win, only their fifth in the league all season. Roberto Firmino headed against the post in the fourth and final minute of stoppage-time before the Liverpool substitute, Adam Lallana, had his effort blocked by Mawson.

Klopp, though, admits his team got what they deserved.

For Swansea, this was a much-needed victory and an unlikely scalp, to end Liverpool’s 18-match unbeaten run in all competitions. Carvalhal, the former Sheffield Wednesday manager who succeeded Paul Clement at the end of last month, has lost just once in six matches since taking charge. Swansea remain bottom but are three points off safety, and only six off 10th-place.

“We are breathing in this moment, we are not in emergency in hospital, we are still in hospital but we can accept visits now,” Carvalhal said.

“We still have a lot of work to do, we are still not in a good position but confidence is high, and the dynamic is better.”

Of navigating a way past Liverpool, who remain fourth, the Portuguese added: “They are like a Formula One team but a Formula One team in London at 4pm in the traffic, it is a car like the others and the speed is difficult. We needed to not open the roads [for them] like in Formula One, because if we did that, we would have lost three or 4-0.” – Guardian service