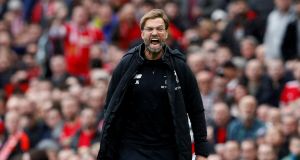 Jürgen Klopp was happy with the Champions League draw until he realised that after playing Manchester City on the Wednesday his Liverpool side would face an early kick-off on the Saturday – against Everton.

The Merseyside derby was originally scheduled for Sunday, April 8th but was brought forward by a day for TV purposes. Manchester City are in a somewhat similar situation – their game between the two legs of the quarter-final is against Manchester United – and it could be the one that sees them crowned Premier League champions, but that game kicks off at a more reasonable 5.30pm.

“We are not going to get much recovery time after what will be a very intense game against City,” the Liverpool manager said. “Obviously whoever made the schedule did not think we would reach the quarter-finals because the derby was originally a Sunday game.

“I know countries where they cancel whole match days so teams can be in the best shape for big games in Europe. We play at 7.45pm on Wednesday and 12.30 on the Saturday. Oops, it’s only Liverpool. City get to play at 5.30. Can you imagine how big that difference is for two sides involved in a Champions League meeting that is bound to be intense? Five hours means the world in terms of preparation and recovery.”

Klopp had originally joked the all-English quarter-final was a dream pairing – “all Manchester United fans must be really happy” – but confessed he was angry about the way the crux of Liverpool’s season has been compromised. “It is not perfect,” he said. “Obviously we have to go the hard way but I am used to that. We take it like it is but, if I cannot be angry about something like this any more, then I am dead. I cannot be politically correct and say nothing because that doesn’t work.

“We are going to have two very intense games against City and the one in between at Everton is not going to be much less intense either. I would at least like to have seen it put on at a normal time and not at breakfast.”

Complaints over Premier League fixture scheduling apart, the Champions League draw threw up some attractive ties, as might be expected, with Sevilla facing Bayern Munich, Juventus taking on Real Madrid in a repeat of last season’s final and Barcelona going up against Roma.

City could win a treble of sorts – they are practically certain to win the league and have the League Cup in the bag – though the treble is out of reach since their FA Cup exit at Wigan. – Guardian