Manager was admitted to hospital on Wednesday after feeling unwell 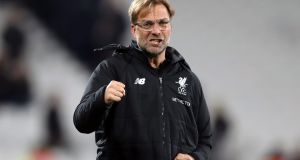 Liverpool manager Jürgen Klopp returned to work on Thursday after his health scare.

The German was discharged from hospital on Wednesday evening having been admitted for tests earlier in the day after feeling unwell. That forced him to miss a first-team training session.

The 50-year-old was back at Melwood by lunchtime on Thursday and oversaw afternoon training.

Spaniard Alberto Moreno, Germany’s Emre Can, Dutchman Georginio Wijnaldum and Serbia’s Marko Grujic have returned from international duty, and the full squad had their first training session back together.

Klopp was boosted by the involvement of Senegalese forward Sadio Mane who, despite returning early from international duty complaining of a slight hamstring issue, was able to take part after two days’ recovery and rehabilitation.

It means the Reds boss looks like being able to select from his strongest squad of the season so far ahead of Saturday’s visit of Southampton.

Midfielder Adam Lallana is back with the group having not played a competitive game this campaign because of a thigh injury.

Captain Jordan Henderson has also declared himself fit after a similar problem caused him to miss the Premier League win over West Ham before the international break and England’s two friendlies against Germany and Brazil.

“I feel good. I completed my first session [on Wednesday], so hopefully I can play a part at the weekend,” Henderson told liverpoolfc.com.