Jürgen Klopp: Liverpool players have to be ‘more angry than sad’ 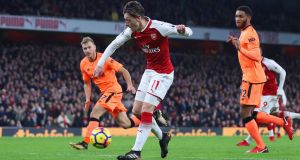 Jürgen Klopp said that Liverpool had to be “more angry than sad or disappointed” after he watched his team throw away a 2-0 lead at Arsenal during a wild five-minute spell in the second half. Arsene Wenger’s team scored three times during that purple patch only for Liverpool to rediscover their composure and equalise through Roberto Firmino.

Klopp lamented both individual errors at the back – most obviously, the flap by the goalkeeper, Simon Mignolet, for Granit Xhaka’s equaliser – and some profligacy from his forwards in the final third. He was entitled to say that his team ought to have scored four more goals. But, in the end, a wacky encounter finished 3-3.

“We had five minutes where we had obvious, individual problems,” Klopp said. “It was on all of the Arsenal goals. There were misjudgments on all of them. Then, we reacted much better and we deserved the point. That was the minimum we deserved.

“We played 94 minutes and for 89 minutes, the performance was what we wanted. The five minutes, of course, were decisive and difficult to explain. We opened the door for them in these five minutes and they took their chances. It was a strange game. Usually at Arsenal, a point is absolutely okay. But tonight it’s different.”

Klopp lost his cool after Firmino’s equaliser. He hurled his water bottle to the floor and turned to face the Arsenal supporters, which went down predictably badly. Klopp would apologise to them shortly afterwards. “I was happy and it was a kind of aggressive happy,” Klopp said. “I have made my apology but the people, if they would all apologise for what they said to me, it would take a little bit longer than my apology.”

Klopp suggested that Mignolet’s error was a one-in-a-thousand shot. He allowed Xhaka’s effort from distance to go through his outstretched hand but he refused to blame the goalkeeper for the dropped points. “Xhaka can shoot a few more times in this life and Simon Mignolet saves these balls in 99.9 per cent of all situations,” Klopp said. “Not tonight.”

The Arsenal manager Wenger said: “I think we should have won at 3-2. That’s the frustration of the night. But it could have been game over at half-time. It was a nightmare first half. We were too far from each other, we were not compact or composed enough. We could have been punished more.

“Credit to the players – even at 2-0 down, we showed great spirit. It was a fantastic game, with quality going forward on both sides. We were more on quick combos, and them on fantastic counter-attacking pace. I want to keep what was said at half-time private. The positive thing was we were only 1-0 down.” – Guardian service

Tokyo Olympics wants Tiger Woods but will he be there? 17:29
Conor McGregor hails Donald Trump as ‘USA goat’ 16:13
Richard Johnson may have broken arm in Exeter fall 15:54
Sam Bennett grabs first win of the season at Santos Tour Down Under 12:06
Ole Gunnar Solskjær says 2-0 Liverpool defeat points to ‘strides forward’ 11:52